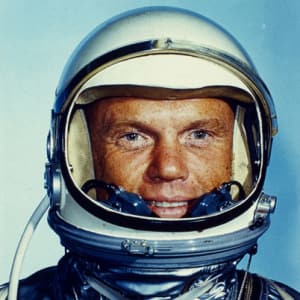 John Glenn was the first U.S. astronaut to orbit Earth, completing three orbits in 1962. He also served as a U.S senator from Ohio.

John Glenn Jr. was born on July 18, 1921 in Cambridge, Ohio. A Marine pilot, he was selected in 1959 for Project Mercury astronaut training. He became a backup pilot for Alan B. Shepard Jr. and Virgil "Gus" Grissom, who made the first two U.S. suborbital flights into space. Glenn was selected for the first orbital flight, and in 1962, aboard Friendship 7, he made three orbits around Earth. After his decorated service in the U.S. Marine Corps and NASA, Glenn went on to serve as U.S. Senator from his home state. He died on December 8, 2016 at the age of 95.

Famed American astronaut and politician John Glenn Jr., who made history in 1962 as the first American to orbit Earth, was born in Cambridge, Ohio on July 18, 1921 to John and Clara Glenn. When he was two years old, his family moved to the small town of New Concord, Ohio, where his father ran a plumbing business. Glenn developed an early interest in science, particularly aeronautics, and a sense of patriotism that would lead him to serve his country later in life. According to Glenn's official website, he had a very happy childhood. “A boy could not have had a more idyllic early childhood than I did,” he wrote.

After graduating from New Concord High School in 1939, he attended nearby Muskingum College. Glenn then joined the American war effort in 1942 by entering into the Naval Aviation Cadet Program. The following year, he completed his studies and was deployed as a Marine fighter pilot in the Pacific front of World War II. Glenn flew 59 combat missions in the South Pacific during this time.

After the war, Glenn continued his service in the U.S. Marine Corps. He served during the Korean War, both as a Marine fighter pilot on 63 missions and as an exchange pilot with the Air Force on 27 missions. During his military service in two wars, he flew 149 missions for which he received many honors including the Distinguished Flying Cross six times. He then enrolled in the U.S. Navy Test Pilot School in Patuxent River, Maryland, and then joined the Naval Air Test Center’s staff of flyers. In 1957, the daring pilot set a new speed record for traveling from Los Angeles to New York in a flight that was dubbed "Project Bullet." He went from coast to coast in three hours and 23 minutes.

In 1959, Glenn took on a new challenge when he was selected for the U.S. Space Program. He and six others, including Gus Grissom and Alan Shepard, went through rigorous training and became known as the "Mercury 7." At the time, the United States was locked in a heated "Space Race" with the Soviet Union over advancements in space technology and research.

“I found weightlessness to be extremely pleasant.” – John Glenn

Glenn made his own significant contribution on February 20, 1962. On that fateful day, Glenn piloted the Friendship 7 spacecraft, which was launched from Cape Canaveral in Florida. He orbited Earth three times during his mission, which lasted nearly five hours. But this historic journey was not without some glitches. In the control room, NASA officials grew worried that Glenn's heat shield was not firmly attached to the spacecraft. Glenn made some adjustments, and managed to make a safe landing.

After this ground-breaking mission, Glenn became an American hero. He was feted with parades and received numerous accolades. President John F. Kennedy presented him with the NASA Distinguished Service Medal, and the two eventually became friends. It was President Kennedy's brother Robert who encouraged Glenn to consider a life in public service. Glenn, who had risen in the ranks to Colonel, continued to serve as an advisor to NASA until 1964, and the following year he retired from the Marines Corps. With a longtime interest in politics he decided to run for office.

In 1964, Glenn entered the Ohio Democratic primary running against incumbent Senator Stephen Young, however, an accident resulting in a concussion forced Glenn to leave the race and put his political career on hold. He took a job as vice president and then president of Royal Crown Cola, but the call to public service drew him back to politics. In 1970, he ran for the Senate again, but was defeated. Four years later, he ran for a Senate seat for the third time and was elected in 1974. The Ohio Democrat served four terms in Congress and held posts on several committees, including the Committee on Government Affairs. During his Senate tenure, he was chief author of the 1978 Nonproliferation Act, served as chairman of the Senate Government Affairs Committee from 1978 until 1995, and sat on the Foreign Relations and Armed Services committees and the Special Committee on Aging. Outspoken on many issues, Glenn campaigned for more funds for space exploration, science and education.

The Right Stuff, a film inspired by the original seven Mercury astronauts and based on Tom Wolfe's 1979 book, was released in 1983 with Ed Harris portraying Glenn.  A year later, Glenn made a bid to become the Democratic presidential candidate, however, he withdrew during the primaries and Walter Mondale ultimately received the nomination.

On October 29, 1998, Glenn made a return to space on the space shuttle Discovery, and made history again as the oldest person to enter space at the age of 77. The nine-day mission had many goals, including an investigation on aging and space travel. The following year, in January 1999, he retired from the Senate.

Glenn met his wife Annie when they were children growing up in New Concord, Ohio. Glenn wrote in his autobiography John Glenn, A Memoir: “She was part of my life from the time of my first memory.” They were married on April 6, 1943 at the College Drive Presbyterian Church in New Concord.

After his retirement, Glenn and his wife founded the John Glenn College for Public Service at the Ohio State University with the mission to improve the quality of public service and to encourage young people to pursue careers in government. The Glenns also serve as trustees of their alma mater, Muskingum College.

Glenn remained a vocal supporter of the space program for the rest of his life and is admired as a legendary figure in American history. In 2012, he received the Presidential Medal of Freedom from President Barack Obama.

John Glenn, the last of NASA's first class of astronauts, died on December 8, 2016 at the age of 95, at Ohio State University Wexner Medical Center in Columbus, Ohio. He is survived by his wife of 73 years, Annie, their two children and grandchildren. The legendary astronaut and senator was laid to rest at Arlington National Cemetery on April 6, 2017, which would have been his 74th wedding anniversary with his wife Annie.