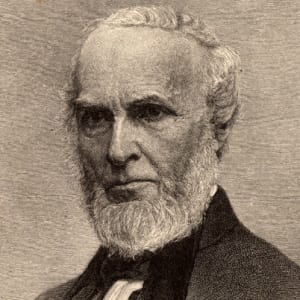 John Greenleaf Whittier was an American poet and abolitionist who, in the latter part of his life, was a household name in both England and the United States.

Born in Massachusetts in 1807, John Greenleaf Whittier's career divides into four periods: poet/journalist, abolitionist, writer/humanitarian and Quaker poet. At age 19, he submitted his poem to William Lloyd Garrison. The two banded together in the abolitionist cause. By 1843 Whittier decided that to utilize the political arena towards abolition. He became an advocate of justice, tolerance and liberal humanitarianism.

Born on December 17, 1807, in Haverhill, Massachusetts, John Greenleaf Whittier became a poet who is also remembered for his contributions to the abolitionist movement. The second of four children born to a Quaker couple, Whittier grew up on a farm. He had little schooling, but he discovered a passion for poetry at a young age.

In 1826, Whittier had his first poem published. Entitled "The Exile's Departure," the poem ran in the Newburyport Free Press. Abolitionist William Lloyd Garrison edited the paper and encouraged Whittier in his writing. Before long, Whittier was pursuing a career in journalism. He served as the editor of the New England Weekly Review from 1830 to 1832. Whittier also published his first book, Legends of New England in Prose and Verse, in 1831.

With the pamphlet Justice and Expediency (1833), Whittier focused his writing talents on advancing the abolitionist cause. In the 1830s, he gave numerous lectures against slavery and penned poems championing its abolition. These works later appeared in the 1837 collection Poems Written During the Progress of the Abolition Question in the United States.

From 1838 to 1840, Whittier edited the abolitionist newspaper the Pennsylvania Freeman. While he was editor, an angry mob destroyed the paper's offices. By 1843, Whittier had chosen to distance himself from radical abolitionist tactics, instead opting to use political methods to advocate for the end of slavery.

Whittier never stopped writing poetry, though his focus changed from the political to the pastoral in his later works. With 1866's Snow-Bound: A Winter Idyl, he became one of the country's most popular poets. The work sold well enough to set him up comfortably; readers embraced his later collections as well.

Having become a revered literary figure, Whittier celebrated his 70th birthday in 1877 with such contemporaries as Henry Wadsworth Longfellow, Oliver Wendell Holmes and Mark Twain. In 1890, Whittier published his last collection of poetry, At Sundown. Whittier was 84 when he died on September 7, 1892, at a friend's home in Hampton Falls, New Hampshire.