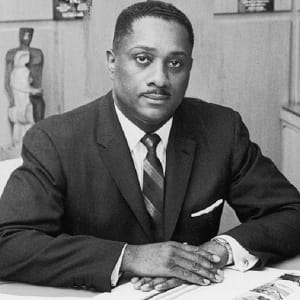 
Celebrated publisher and businessman John H. Johnson grew up in poverty in Arkansas and moved to Chicago as a teenager. It was there he established the Johnson Publishing Company, which began with Negro Digest in 1942. Johnson went on to create two more successful publications geared toward an African-American audience, launching Ebony in 1945 and Jet in 1951. His empire grew to include ventures in book publishing, cosmetics and radio. Johnson died in Chicago in 2005.


Born in January 1918, African-American publisher and businessman John H. Johnson spent his early years in Arkansas City, Arkansas. His father, Leroy Johnson, died in a sawmill accident when John was a young boy. His mother, Gertrude, encouraged her son to excel and even moved the family to Chicago to advance his education. At the time, there was no public high school for black students in Arkansas City.

In Chicago, Johnson first attended Wendell Phillips High School and later DuSable High School. He proved himself to be a leader at DuSable, serving as class president in both his junior and senior years. Johnson also showed an interest in journalism and became editor of the school’s newspaper. After graduating in 1936, Johnson went to work for the Supreme Liberty Life Insurance Company.

Creator of ‘Ebony’ and ‘Jet’

Unable to secure a loan from a bank due to his skin color, Johnson used his mother’s furniture as collateral to raise $500 to launch the Johnson Publishing Company, and printed his first issue of Negro Digest in November 1942. Three years later, Johnson debuted Ebony, a general interest magazine for African Americans. The first issue sold 50,000 copies, making Johnson the owner of the nation’s most widely circulated black publication. He soon convinced major companies to advertise in his publication, and he has been credited with creating the black consumer market. Johnson added to his successful publishing company in 1951 with Jet, a newsweekly magazine.

Johnson expanded in new directions with the creation of the Ebony Fashion Fair in 1958, a venture overseen by his wife, Eunice. He and Eunice had married in 1941 and adopted two children, son John Jr. and daughter Linda. The success of the fashion fair inspired them to launch their makeup company, Fashion Fair Cosmetics, in 1973. Johnson Publishing also branched into other forms of media, eventually operating multiple radio stations. By the early 1980s, Johnson had become one of the country’s richest business leaders with an estimated net worth of $100 million.


Throughout his career, Johnson was a strong supporter of the civil rights movement. In 1955, he helped raise awareness about racial injustice by publishing photographs of Emmett Till, a black teenager who had been murdered by angry white men for reportedly flirting with a white woman. Jet was one of the first media outlets to print these images of brutality, which put a spotlight on the horrific racial conditions in the South.

Johnson also had Martin Luther King Jr. write an advice column for Ebony in the late 1950s. This column gave King a national platform to garner support for the civil rights movement. Active in local politics, Johnson helped Harold Washington become the first African American to win election as Chicago’s mayor in 1983. He was involved in international diplomacy as well, serving as a special ambassador to the Ivory Coast and Kenya independence ceremonies in the 1960s.

Over the years, Johnson received numerous awards and accolades for his contributions to society. He was awarded the Presidential Medal of Freedom by President Bill Clinton in 1996. At the time, Clinton credited Johnson with giving "African Americans a voice and a face, in his words, 'a new sense of somebody-ness, of who they were and what they could do.' "

Throughout his career, Johnson made his company a family affair; he not only worked with his wife, but his daughter, Linda, as well. (John Jr. died in 1981.) Johnson appointed Linda to take over the reins of his company in 2002 as president and CEO, although he remained its chairman and publisher until his death from heart failure on August 8, 2005.

Johnson was given a send-off fit for a world leader, his body laying in state for a time at the Johnson Publishing Company’s Chicago headquarters. At his funeral, more than 1,000 people gathered to say goodbye, including activist Al Sharpton, politician Carol Moseley Braun and future U.S. President Barack Obama. Poet and author Maya Angelou also offered a touching tribute, recalling Johnson as having “the vision of a William Randolph Hearst and the perseverance of the legendary hero, John Henry. With his gifts, he introduced an entire race to the beauty and the brilliance they already had.”