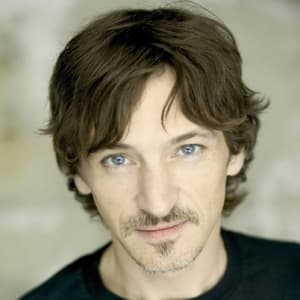 Veteran character actor John Hawkes has appeared on TV in Deadwood and such films as Winter’s Bone and The Sessions.

Born in Minnesota in 1959, actor John Hawkes later settled in Austin, Texas, where he co-founded Big State Productions, a theater group. In the 1980s, Hawkes toured with the play Greater Tuna. He also starred in his own solo show, Nimrod Soul, in the 1990s. Hawkes got his big break in 2000, with the film The Perfect Storm. He later earned an Academy Award nomination for 2010's Winter's Bone.

Actor John Hawkes was born John Marvin Perkins in Alexandria, Minnesota, on September 11, 1959, and raised in the small town of Pastoral, Minnesota. Hawkes first discovered acting during his junior year of high school. He auditioned for a school production and "immediately felt that weird sense of being home, that this is what I was meant to do," he later explained to Backstage magazine.

After a year at St. Cloud State University, Hawkes decided to hit the road and try his luck elsewhere. He eventually moved to Austin, Texas, where he helped establish the Big State Productions theater company. He also performed with a punk band called Meat Joy for a time.

After moving to Los Angeles, Hawkes played bit parts to support himself. His early roles seemed to be all of the same variety, as he later explained to The Guardian: "I played a lot of crazy people when I got to town: Psychos, nerds, psycho-nerds," he said. "I did whatever crappy TV show I could."

Hawkes also continued to seek stage work, touring for a time with Greater Tuna in the 1980s. This production had two actors portraying the inhabitants of a small Texas town. Hawkes later revisited rural characters in his solo show, Nimrod Soul, in the 1990s.

On the big screen, Hawkes had a career breakthrough with the 2000 drama The Perfect Storm. He appeared alongside George Clooney and Mark Wahlberg in this tragic tale of fishermen at sea during deadly weather. His character, Bugsy, provided some comic relief to this heartbreaking film, and his skilled performance gave his career a boost. Hawkes soon landed supporting roles several films, including the 2003 thriller Identity with John Cusack.

Hawkes moved on to leading-man status with the independent dramatic comedy Me and You and Everyone We Know (2005). Around this time, he also scored a plum role on HBO's popular western series Deadwood, playing Sol Star, a Jewish merchant. Hawkes continued to juggle film and television work over the next few years, sharing the screen with acting heavyweights Denzel Washington and Russell Crowe in American Gangster (2007), and making guest appearances on the TV shows Monk and Lost, among others. Hawkes also played Danny McBride's brother on the popular comedy Eastbound & Down.

The following year, Hawkes took on a very different yet equally disturbing role in Martha Marcy May Marlene. He played Patrick, the leader of a cultish community who lures the title character, Martha (Elizabeth Olsen), into his flock. The film cuts back and forth between Martha's time with Patrick's group, and her life after escaping his clutches.

Hawkes went on to tackle a physically challenging role in The Sessions (2012), which is based on a real-life story. In the film, he plays a writer living in an iron lung, who seeks to lose his virginity with the help of a sex surrogate (Helen Hunt). The drama was a hit at the 2012 Sundance Film Festival, spurring speculation about a possible Academy Award nomination for Hawkes. Hawkes went on to work on a number projects, including the biopic Low Down, based on the life and career of famed American modern jazz pianist Joe Albany. Hawkes will play Albany in the film, which is slated to be released in 2013.

Off the set, Hawkes is an accomplished singer and musician. He has recorded and performed with the group King Straggler, along with band members Rodney Eastman and Brentley Gore.