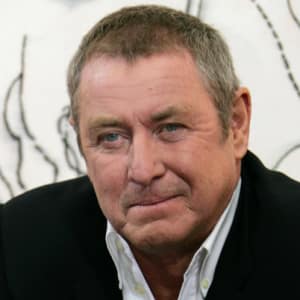 British actor John Nettles is known for his crime-fighting, mystery-solving roles. He played Detective Chief Inspector Barnaby on the show The Midsomer Murders.

John Nettles was born October 11, 1943 in Manchester, England. He made his first TV appearance on the BBC comedy series The Liver Birds in the early 1970s. In 1981, he took the role Detective Sergeant Jim Bergerac. In the late 1990s, he became Detective Chief Inspector Barnaby on The Midsomer Murders. The show shot its fiftieth episode in 2006. He has also lent his voice to several documentaries.

Actor. Born on October 11, 1943, in Manchester, England. Before he began playing detectives on television, Nettles grew up in Cornwall. He later studied history and philosophy at the University of Southampton and hoped to become a teacher. While at the university, he discovered acting and played mostly small parts in Royal Court Theatre productions. He left school to pursue a career in the theater and became a member of the Royal Shakespeare Company in Stratford-upon-Avon.

Nettles made his first television appearance on the BBC comedy series The Liver Birds in the early 1970s. In 1981, he took the role that would make him a star in Great Britain and other several countries. As Detective Sergeant Jim Bergerac on Bergerac, he solved crimes and caught crooks on the British island of Jersey in the English Channel. The series lasted for ten years and even boosted tourism to the island. After the show ended, Nettles returned to the Royal Shakespearean Company and performing on the stage.

In the late 1990s, Nettles was offered another crime-fighting, mystery-solving role. This time he became Detective Chief Inspector Barnaby who watches over a quiet, beautiful English county filled with dangerous inhabitants in The Midsomer Murders. The first episode aired in England in 1997, and the show shot its fiftieth episode in 2006. The series has remained popular for nearly ten years and has featured murder by almost any means imaginable, including a slide projector and bottles of relish.

Besides his television and theater performances, Nettles has lent his distinctive voice to several documentaries. He has also written several books, including Nudity in a Public Place (2002). Nettles takes a humorous look at his experiences as a "semi-celebrity" in this book.

Married twice, Nettles has a daughter, Emma, with his first wife Joyce. He and his second wife Cathy live near Stratford-upon-Avon, where he likes to attend the theatre whenever he can.