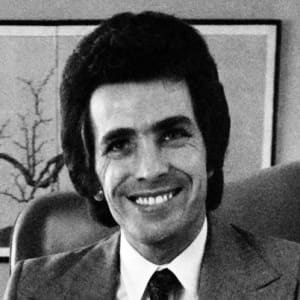 John Stephen was a British fashion icon of 1960's "Swinging London." Known for his flamboyant and colorful designs, Stephen was the leader of the '60s male "peacock revolution." Dressing the likes of The Beatles and The Rolling Stones, Stephen influenced a generation of young males with hip, eye-catching fashions. His successful chain of shops on Carnaby Street in London dubbed him as "The King of Carnaby," and he soon expanded his franchise throughout London, as well as internationally. Stephen went on to design clothes for celebrities like Elizabeth Taylor and Marlene Dietrich. He died in February 2004.

British fashion icon John Stephen was born on August 28, 1934, in Glasgow, Scotland. The sixth of nine children, Stephen was a charismatic child and always had a knack for fashion and design. At the age of 18 he moved to London, working as a waiter and in the military department at Moss Bros. in Convent Garden, where he learned the basics of traditional tailoring. He soon began work as an assistant in a small men's boutique called "Vince," located on Newburgh Street.

In 1957, Stephen set up his first shop at No. 5 Carnaby Street. In the 1950s, Britain was facing a post-war graveness, which was reflected in men’s clothing. In an effort to stray away from the dull and dreary fashions of the time, Stephen sold vibrant flamboyant clothing in bright colors and floral patterns.

As his imagination grew so did his designs- which included things like mini-kilts, flared velvet jackets and textured fabric, all created by hand in an office in the back of the store. The hit store, known for its bright yellow exterior and blaring pop music, soon started a trend of lively boutiques filled with unique designs and young, attractive staff.

As the new "King of Carnaby Street," Stephen soon expanded his retail business, opening 15 stores in the area under different names and franchises internationally including in the United States and Rome. Soon it became acceptable for men to spend time and money on their appearance, and Carnaby Street became a hip area for young males. The era, in which men's ostentatious styles became the forefront of fashion, soon became known as the "Peacock Revolution."

Even men's hairstyles became expertly styled, and the preferred body type was long and lean. By the 1960s, Stephen's clothes were being worn by musicians and icons at the forefront of "Swinging London," such as the Rolling Stones and the Who. Stephen dressed the likes of rockers like the Beatles and the Kinks, with psychedelic prints and bold, attention-grabbing garments. In 1967, he began designing women's clothing as well, soon dressing celebrities like Elizabeth Taylor and Marlene Dietrich.

After taking his company public in 1972, Stephen sold it three years later to begin his brand "Franicsco-M," selling fashions from Italy and France, but retired in 2002 due to poor health. He has been honored with several exhibitions, most notably a complete archive in the costume department at the Victoria & Albert Museum in London. He died on February 1, 2004.