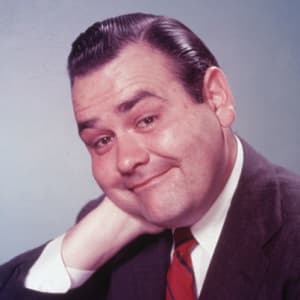 American comedian Jonathan Winters was once described by talk-show host Jack Paar as “pound for pound, the funniest man alive.”

Born on November 11, 1925, in Dayton, Ohio, Jonathan Winters hosted several local programs for Columbus's WBNS-TV from 1950 to 1953. His appearance on Arthur Godfrey's Talent Scouts led to guest-star assignments on network television, as well as a featured spot in the Broadway revue Almanac. In 1956, Winters starred on his own weekly TV variety show. He also pursued a successful nightclub career. He on April 11, 2013, at age 87, in Montecito, California.

Jonathan Winters was born on November 11, 1925, in Dayton, Ohio, and went on to become a groundbreaking stand-up comedian. He attended school in Springfield and, at the age of 17, joined the U.S. Marine Corps. After serving for two years in the South Pacific, he returned to his native state and enrolled at Kenyon College. He later studied at the Dayton Art Institute, where he met his future wife, Eileen Schauder. The couple would later have two children, a daughter, Lucinda, and son Jay.

From 1950 to 1953, Winters hosted several local programs for Columbus's WBNS-TV. After moving to New York in 1953, Winters earned a spot on Arthur Godfrey's Talent Scouts. This appearance led to a number of guest-star assignments on network television, as well as a featured part in the Broadway revue Almanac in 1954. By this time, the young comedian had earned a reputation as a pioneer comic and impressionist, in New York City and beyond.

In 1956, Jonathan Winters began starring on his own weekly TV variety series, The Jonathan Winters Show. The show made television history that same year, when it broadcast the first public demonstration of color videotape. In addition to hosting the show, Winters pursued a successful nightclub career.

In 1964, Winters made a memorable appearance on The Jack Paar Show, performing in one bit with a foot-long stick a number of impressions, including of a fisherman, violinist and bullfighter. He later spoke about his imagination and acting talent with U.S. News & World Report: "As a kid, I always wanted to be lots of things," Winters said. "I was a Walter Mitty type. I wanted to be in the French Foreign Legion, a detective, a doctor, a test pilot with a scarf, a fisherman who hauled in a tremendous marlin after a 12-hour fight."

Winters went on to work on the album The Little Prince (1975), based on the best-selling 1943 book by French author Antoine de Saint-Exupéry, alongside Richard Burton, John Carradine, Jim Backus and Claudine Longet, among others. Winters earned his first Grammy Award for the album, and went on to win a second Grammy for his work on the 1996 comedy album Crank Calls.

In 1991, Winters won his first and only Emmy Award (outstanding supporting actor in a comedy) for his role as Randy Quaid's father on the sitcom Davis Rules. In 1999, the comic actor the Kennedy Center's Mark Twain Prize for Humor, following the footsteps of Richard Pryor, the first recipient of the award, in 1990.

Jonathan Winters died of natural causes on April 11, 2013, at the age of 87, at his home in Montecito, California.

He was survived by his two children, Lucinda and Jay, and five grandchildren. (His wife of more than 60 years, Eileen (Saunders) Winters, died on January 11, 2009.)