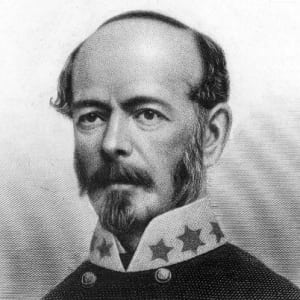 Joseph Eggleston Johnston was born February 3, 1807 near Farmville, Virginia. At the outbreak of the Civil War he offered his services to Virginia. He was credited with the first important Southern victory at the First Battle of Bull Run. When the Peninsular Campaign began he withdrew to defend Richmond. Severely wounded at the Battle of Fair Oaks, he was replaced by General Robert E. Lee.