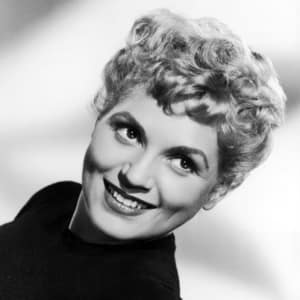 Actress Judy Holliday was know for playing dumb but good-natured characters. She won an Academy Award for best actress in the film Born Yesterday.

Actress Judy Holliday was born Judith G. Tuvim on June 21, 1921, in New York City, the daughter of Abraham Tuvim, a journalist and fund raiser for Jewish and social organizations, and of Helen Gollomb, a piano teacher at the Henry Street Settlement. At the age of 6, her parents separated. An unusually brilliant child with a 172 I.Q., Tuvim described herself as "one of those obnoxious children who read War and Peace, Schnitzler and Molière."

After graduating from the Julia Richman High School in New York City in 1938, she hoped to attend Yale Drama School but was too young for admission. She went to work in the summer of 1938 as a switchboard operator at Orson Welles's Mercury Theater. Later that year, Max Gordon, owner of a Greenwich Village nightclub, offered her a chance to demonstrate her talent as a scriptwriter and lyricist. Tuvim contacted a group of performers she had met while vacationing at an upstate resort who called themselves "Six and Company."

Among them was an unknown pianist, Leonard Bernstein, and lyricists Betty Comden and Adolph Green. The group renamed themselves "The Revuers," and as Lee Israel comments, "with her immense, fawnlike eypes and her brown hair piled up, Judy's talent for comedy was quickly perceived." The Revuers subsequently appeared for thirty-two weeks on an NBC radio program. With Judy Tuvim's career burgeoning, she adopted a new name, Judy Holliday (tuvim is the Hebrew word for holiday). In 1943 The Revuers left for Hollywood, but to their disappointment the major studios were more interested in the girl with "the natural gift of comedy," than in the group.

Holliday finally accepted a seven-year contract with Twentieth Century-Fox in 1944 but insisted that The Revuers appear in her first film, Greenwich Village. It was a box office failure. Unhappy with the beginnings of her film career, Holliday did not enjoy her stay in Hollywood. After appearing in Winged Victory (1944) and Something for the Boys (1944), she was released from her contract and returned to New York. In March 1945, she starred on Broadway in Kiss Them for Me, playing the first of her many dumb but good-natured characters.

Her performance won her the Clarence Derwent Award as the best supporting actress of the year. In early February 1946 Jean Arthur's misfortune came to be Holliday's biggest break. Three days before Garson Kanin's stage comedy Born Yesterday was scheduled to open in Philadelphia, Arthur was forced to leave the cast due to illness. Holliday auditioned for the role of Billie Dawn and learned it in three days.

The play opened on February 4, 1946, to rave reviews and Holliday then played Billie Dawn for three years. Garson Kanin remembers her as a "tremendously rare combination of intellect and instinct. And a girl of principle, and of deep social feeling." In 1948 the screen rights to Born Yesterday were purchased by Columbia Pictures. As a movie, Born Yesterday (1950) brought Holliday an Academy Award for best actress. Gloria Swanson, a nominee for the Oscar for her performance that year in Sunset Boulevard, congratulated Holliday saying, "My dear, couldn't you have waited? You have so much ahead of you—so many years. This was my only chance."

Holliday's other screen credits included The Marrying Kind (1952), about a blue-collar couple facing divorce. The remaining films for Columbia were all tailor-made for the roles she played best. George Morris commented that she could "switch from comedy to tragedy with a mere inflection in her voice: a mixture of dumb blonde, naivete, New York savvy was her strongest instrument."

Holliday's career was threatened in 1952 when she was subpoenaed, along with many other performers, by a Senate subcommittee investigating subversive influences in the performing arts. As Lee Israel comments, "In the context of the 1950's when guilt was historic and by association … she had plenty to be frightened of." Certain facets in her life lead to such conclusions. Many of the performers at the Mercury Theater were labeled "radicals," and she had been a signer of an advertisement that appeared on December 1, 1948, calling upon the film industry to revoke its Communist blacklist.

Holliday stated to the subcommittee: "I am not a member of any organization that is listed by the Attorney General as subversive. In any instance where I lent my name in the past, it was certainly without knowledge that such an organization was subversive." But certain allegations could not be denied. "Irresponsible and slightly more than that—stupid," was Holliday's self-description of her association with these groups. As a result of the hearings Holliday was blacklisted by television for 10 years.

She was still able to star in films, such as It Should Happen to You (1954), Phffft (1954), The Solid Gold Cadillac (1956), in which she played a shrewd, inexperienced businesswoman, and Full of Life (1957). In 1956 she starred on Broadway as Ella Peterson in Bells Are Ringing and received an Antoinette Perry Award for her performance. She recreated the role four years later in the film version.

In 1960, during the pre-Broadway tryout of Laurette, in which she played her first dramatic role, Holliday developed a voice problem that prevented her from projecting her voice beyond the first few rows of the theater. The show was forced to close, and the problem was subsequently diagnosed as cancer. Holliday was unable to perform again, with the exception of a brief run in the musical Hot Spot (1963). At that time, she was involved in an intense relationship with jazz saxophonist Gerry Mulligan. After five years of struggle with her illness, Holliday died on June 7, 1965, in New York City.

Judy Holliday's career was paradoxical. Although gifted with intelligence and humor, she consistently portrayed inarticulate nitwits. Gene Lees, who remembered her comedic ability, remarked that "had she lived, Judy Holliday would be, without question, one of our major dramatic actresses."3 In 1948, Holliday married David Oppenheim, a clarinetist. They had one child, but were divorced in 1957.