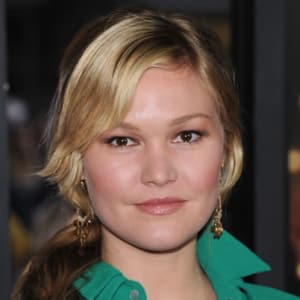 Actress Julia Stiles is best known for her roles in films like Save the Last Dance, 10 Things I Hate About You and The Bourne Ultimatum.

Born in New York City in 1981, Julia Stiles had a love of theater from an early age, particularly the works of Shakespeare. She began acting at age 11, and by 18, had her first lead part in 10 Things I Hate About You, starring opposite Heath Ledger. Based on Shakespeare's The Taming of the Shrew, 10 Things was a hit, and became a teen classic. Stiles went on to star in Hamlet, Save the Last Dance and The Bourne Ultimatum, as well as 10 episodes of Showtime's Dexter and numerous theater productions. She also wrote and directed Revolving, a short starring Zooey Deschanel.

Julia O'Hara Stiles was born on March 28, 1981 in New York City. She is the oldest of three children born to Judith Stiles, an artist who owned a ceramics shop in Greenwich Village, and John Stiles, a second-grade teacher who also helped sell Judith's artwork. Julia Stiles grew up in a loft apartment in New York City's SoHo neighborhood that served as both the family home and her mother's art studio. When Stiles was growing up, SoHo was still largely an abandoned industrial wasteland. Stiles recalls sidewalks strewn with drug paraphernalia and disembodied doll limbs from a nearby toy factory. "They had broken eyeballs and missing limbs," Stiles remembers. "My mom was like, 'Don't touch them! They're dirty!'"

Stiles was an intelligent and outspoken child. She describes her parents as liberal 1960s radicals, and from almost the time she could talk, she joined in their political arguments at the dinner table. She began working at her mother's ceramics shop at age 6, working behind the register and chatting with the customers. Stiles also developed a love of theater at a very young age. Her parents frequently took her to the theater, and Stiles became so infatuated with Shakespeare's plays that she kept a bust of the bard in her bedroom. She took modern dance lessons, and taught herself how to act by watching the TV series The Honeymooners and acting out different parts along with the show.

As a child, Stiles also loved to write, and whenever she wanted something from her parents, she stated her case in handwritten letters. At the age of 11, she wrote a letter to New York City mayor Ed Koch suggesting he place more trash bins along the streets. Another letter landed Stiles her first role in the theater. At 11, she wrote to the director of New York's La MaMa Theatre Company, and within months she was acting in its avant-garde productions.

After a few years of acting exclusively in the theater, Stiles made her film debut with a non-speaking role in the 1996 film I Love You, I Love You Not, starring alongside Jude Law and Claire Danes. She then landed her breakthrough film role by again penning a letter, this time to director Michael Steinberg, who agreed to cast her in his 1998 dark comedy Wicked. Although Wicked was a hit at the Sundance Film Festival, it never aired in theaters. But Stiles's role in the film placed her on the radar of casting agents and film critics.

In 1999, Stiles earned a leading role opposite Heath Ledger in 10 Things I Hate About You, an adaptation of Shakespeare's The Taming of the Shrew set in a modern high school. The film proved to be an enormous success, quickly becoming something of a modern teen classic and earning Stiles an MTV Movie Award (for breakthrough female performance), a Teen Choice Award, the "Most Promising New Actress" designation from Chicago Film Critics, and a legion of adoring young fans.

After appearing in the 2000 romantic comedy flop, Down to You, with Freddie Prinze Junior, Stiles starred in another modern day Shakespearean adaptation, playing Ophelia alongside Ethan Hawke in Hamlet (2000). Having established herself as the go-to actress for modern takes on Shakespeare's strong-willed female characters, Stiles was the obvious choice to play Desi, an updated Desdemona, in the 2001 film O, a modern spin on Othello. That same year, Stiles turned in her most memorable performance to date in 2001's Save the Last Dance. She played a white, Midwestern girl and aspiring ballet dancer who transfers to an inner-city high school and falls in love with a black student, played by Sean Patrick Thomas, who helps her train by teaching her hip-hop dance. Stiles again won a Teen Choice Award and several MTV Movie Awards (for best female performance, best dance sequence and best kiss) for her performance.

However, Stiles was not wholly satisfied by her life as an actress, and in the fall of 2000, she enrolled at Columbia University to study English literature. Stiles later said that, at first, it was difficult to be a celebrity on a college campus: "In the beginning, it was a little hard," she said, "because … I wasn't even really fully aware of what people were saying. …I would get people coming to my door, and knocking on it in the middle of the night. But it pretty much died down." Stiles frequently took time off from school to pursue her film career, but graduated from Columbia in 2005, with a Bachelor of Arts degree in English.

In 2002, Stiles starred opposite Matt Damon, playing Nicky Parsons in the hugely popular trilogy of films, The Bourne Identity, and went on to perform in The Bourne Supremacy (2004) and The Bourne Ultimatum (2007). Between Bourne filmings, she took on a diverse range of projects: She appeared in the movies Mona Lisa Smile, It's A Guy Thing, The Prince and Me and The Omen; the New York theater productions of Eve Ensler's The Vagina Monologues, and Twelfth Night at Shakespeare in the Park; and wrote and directed Revolving, a short film starring Zooey Deschanel, a collaboration with Elle magazine.

In 2010, Stiles took on a new challenge when she turned to TV, signing on for 10 episodes in the Showtime series Dexter. Her performance earned her a Primetime Emmy for Outstanding Guest Actress in a Drama Series, and a Golden Globe nomination for best supporting actress in a TV series.

Not long after, Stiles began working on the film Between Us (2012), alongside Taye Diggs, as well as other films. Her 12-part web series, Blue, launched on the YouTube original content channel WIGS in 2012.

Stiles has dated actor Joseph Gordon-Levitt and artist Jonathan Cramer. Despite rumors alleging that, while filming Dexter, she and her then-married co-star Michael C. Hall were an item, Stiles maintains that the two were never romantically involved. She began dating actor David Harbour in July 2011.

Stiles supports Habitat for Humanity and Amnesty International, and is active in political and social causes. She has also authored essays on feminism for the British newspaper The Guardian.

Since graduating from college, Stiles made a transition from the teenage flicks that marked her early career into more mature, substantive roles. However, she says that she does not intend to obsess about her future, but prefers to live in the moment while letting life take her where it may. "I think women get caught up too much in having a plan—I'm going to get married at this age; I'm going to have a kid at this age—and then they just try to find a guy who will fit into that picture," she says. "I don't want my life to be based on that. I would rather it all evolve organically."