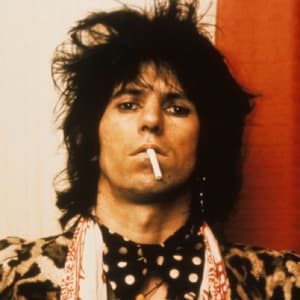 Guitarist Keith Richards is one of the driving forces behind the Rolling Stones, the self-proclaimed “World’s Greatest Rock & Roll Band.”

Keith Richards was born on December 18, 1943, in Dartford, England. He eventually joined the group Little Boy Blue and the Blue Boys, which by 1963 became the Rolling Stones. The band made the British charts in 1964 and over the ensuing years became a huge worldwide phenomenon with major hits such as "(I Can't Get No) Satisfaction," "Angie" and "Miss You," along with albums like Out of Our Heads, Sticky Fingers, Some Girls and Tattoo You. In 2010 Richards published his autobiography, Life.

Musician, singer and songwriter Keith Richards was born on December 18, 1943, in Dartford, England. Richards is one of the driving forces behind the Rolling Stones, the self-proclaimed "World's Greatest Rock & Roll Band." One early influence on the future rhythm guitarist was his grandfather, a musician and bandleader. Richards's mother, Doris, also had a great ear for music. Richards developed a passion for singing as a child, performing in choirs at school. Around the age of 10, he sang at the coronation of Elizabeth II in 1953 as part of a choir.

Richards' voice changed in his teens, and so did his interests. Around the age of 15, he got his first guitar as a present from his mother. Richards devoted much of his time to learning to play his instrument, teaching himself such songs as Elvis Presley's "That's All Right, Mama."

A poor student, Richards was expelled from Dartford Technical School for skipping class. Dartford's headmaster suggested Richards attend Sidcup Art School instead. But Richards continued his rebellious ways at Sidcup, spending more time working on his music than studying commercial art. While at art school, Richards met up with guitarist Dick Taylor, who was in a band with Mick Jagger. Richards knew Jagger when the boys were growing up in Dartford. Before long, Richards joined their group, Little Boy Blue and the Blue Boys.

All three members shared a love of American blues, and Richards especially found a lot of inspiration in the work of American rock 'n' roll great Chuck Berry. He bought himself an electric guitar and learned how to play some of Berry's hits, including "Maybelline."

The band focused mostly on creating a blues sound and landed a few gigs. Jagger and Richards went to check out Alexis Korner's Blues Incorporated, an emerging blues group that often played at the Ealing Club. That night, the band was joined by an amazing guest guitarist, Brian Jones, who was using the stage name "Elmo Lewis" at the time.

Richards and Jagger were impressed by Jones, and the trio became roommates and bandmates as Jones tried to put together his own group. Their friend Dick Taylor and pianist Ian Stewart were also part of the early lineup of the Rollin' Stones in 1962.

By the middle of the next year, the band had become the Rolling Stones and its lineup had changed, with Charlie Watts joining as drummer. Taylor left the group, and was replaced by musician Bill Wyman. Stewart stayed on to serve as the Stones' road manager as well as a guest musician. Under the direction of their manager Andrew Loog Oldham, the Rolling Stones were marketed as a group of rough-and-tumble types.

At first, the band mostly recorded cover versions of other people's songs, but Richards and Jagger, along with their bandmates, soon emerged as a powerful songwriting team—occasionally using the pseudonym "Nanker Phelge" for some of their early work. The Rolling Stones first made the British charts in 1964 with a cover version of Bobby Womack's "It's All Over Now." That same year, the band released their self-titled debut album and toured the United States, having their first American hit with "That Girl Belongs to Yesterday." More hits soon followed, including the chart-topping "(I Can't Get No) Satisfaction" and "Paint It Black" along with albums like Out of Our Heads (1965) and Aftermath (1966).

Many of the band members seemed to live up to their image as wild rockers, enjoying a hard-partying lifestyle. Richards's home in the English countryside was raided by police on February 12, 1967. In addition to Richards, Jagger, Jagger's girlfriend Marianne Faithfull and several others were in the home at the time. During their search, police officers found drug paraphernalia and other questionable substances. Both Jagger and Richards were tried and convicted for drug-related offenses, but their sentences were dropped on appeal. Richards would face several more drug-related arrests in the coming years.

After the departure of Jones from the group in 1969, the Stones took on an even more rock-driven sound. Richards became a father for the first time in December of that that year when girlfriend Anita Pallenberg gave birth to their son Marlon. The couple later welcomed a second child, a daughter named Dandelion (later known as Angela), in 1972. Their third child, a son named Tara, died several weeks after his birth in 1976.

By the late 1970s, Richards had developed a serious heroin habit. In 1977 he was busted with a large amount of the drug as well as cocaine in Toronto, Canada. Facing a life sentence, Richards was allowed to travel to the United States to seek treatment for his addiction. The charge against him was reduced.

Despite his struggles, Richards was able to get back to making music. The Stones's next album, Some Girls (1978), was a huge success, selling eight million copies. Still, Richards continued to have substance abuse issues and tensions within the band began to bubble over, especially between Richards and Jagger. They bickered while making albums and touring, going for long periods without speaking.

The future of the Stones seemed unclear, but Richards was definitely headed in a new direction in his personal life. In 1983, on his 40th birthday, Richards married model Patti Hansen. The couple would later have two daughters together, Theodora and Alexandra.

The Rolling Stones were mostly on hiatus for the mid-to-late 1980s as Jagger focused on his solo efforts. Working on his own, Richards released his first solo album, Talk Is Cheap (1988), which earned mostly positive reviews. But his 1992 followup Main Offender failed to attract much attention.

Reuniting for Steel Wheels (1989), Richards and Jagger wrote most of the album together. Their recording was heralded by some as the bands' comeback. Their next studio recording, Voodoo Lounge (1994), was a solid seller as well, making it to the No. 2 spot on the charts. For Bridges to Babylon (1997), the band sought to update their sound with such collaborators as the Dust Brothers.

In 2005, the Stones released their next studio recording, A Bigger Bang, which received many positive reviews and sold well despite having no breakout hit singles. To support the record, the band once again went on tour. Some of their 2006 dates had to be rescheduled after Richards suffered a head injury from falling out of a tree in Fiji. To treat the injury, he was required to undergo brain surgery. Richards made a full recovery, and resumed touring several weeks later. Richards has stated that he has given up drugs as a result of the surgery.

Richards made it to the big screen in 2007 with a small role in Pirates of the Caribbean: At World's End. In the film, he played the father of Johnny Depp's popular pirate Captain Jack Sparrow—a character partially inspired by Richards.

In October 2010 Richards released his autobiography, Life. The book revealed he is an avid reader and owns a vast collection of literary work as well as chronicling his reflections on the rock star world, drug busts, the women in his life and his relationship with Jagger.

The Rolling Stones made history on March 25, 2016, when they played a free concert to 500,000 people in Havana, Cuba, where their music previously had been banned by the country’s Communist regime for being subversive.

The concert followed a historic visit from U.S. President Barack Obama just days prior, which was part of an effort to normalize U.S. relations with Cuba.

"We have performed in many special places during our long career, but this show in Havana will be a milestone for us, and, we hope, for all our friends in Cuba, too," the band said in a statement. The show at Havana’s Ciudad Deportivo sports arena is the band’s first concert in Cuba and part of its 2016 South American tour.