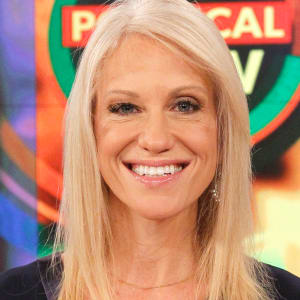 Kellyanne Conway is a pollster and political consultant who was the 2016 campaign manager for President Donald Trump, and is currently serving as a counselor to the president.

Who Is Kellyanne Conway?

Born on January 20, 1967 in Camden, Jersey, Kellyanne Conway worked as a professional pollster, running her own company and working with prominent Republican political figures to aid their efforts to connect with female voters. After running a super PAC organization for Senator Ted Cruz, Conway was hired by Donald Trump to work as campaign manager for his 2016 presidential campaign. With Trump's election as the 45th U.S. president, Conway became the first woman to run a successful presidential campaign, and she was hired as a top White House counselor.

Kellyanne Fitzpatrick was born on January 20, 1967, in Camden, New Jersey. Her parents split when she was three, and she was raised in Waterford Township by her mother, maternal grandmother and two unmarried aunts. Conway worked on a blueberry farm as a teen, and won the New Jersey Blueberry Princess pageant in 1982. She graduated from St. Joseph's High School in 1985, and then attended Trinity College in Washington, D.C., earning a degree in political science. She went on to earn her law degree at George Washington University Law School.

Conway practiced law for a time before becoming a polling consultant, receiving mentorship from Republican leaders in the field. In the mid-‘90s, she launched the polling company, inc./WomanTrend, providing advice to corporate brands about reaching female demographics and going on to advise male Republican politicians on how to appear more relatable to women voters. Conway worked with prominent figures like Dan Quayle and Newt Gingrich. She also appeared as a talking head on Bill Maher’s Politically Incorrect.

In 2005, she and Celinda Lake wrote the book What Women Really Want: How American Women Are Quietly Erasing Political, Racial, Class, and Religious Lines to Change the Way We Live (2005). The following decade, the staunch conservative supported an immigration reform document that called for millions of undocumented immigrants to eventually receive citizenship. The document was seen as part of a strategy to draw Latino voters to the Republican Party.

During the 2016 presidential primary campaign, Conway ran a group of super PACs in support of Senator Ted Cruz’s unsuccessful bid to win the Republic nomination. She was later hired by businessman and reality TV star Donald Trump to work as his campaign manager after Corey Lewandowski and Paul Manafort were fired from the position.

With reported support from right wing strategist Steve Bannon, Conway became the first female campaign manager of a Republican presidential campaign. (She had also previously owned a condo in Trump World Tower and was asked by Trump in 2015 to work for his campaign.) Conway was seen by pundits as someone whom the volatile Trump trusted and listened to in the race against former First Lady Hillary Clinton.

In a historic victory, Trump received the majority of electoral votes in the November 2016 election to become U.S. president despite losing the popular vote to Hillary Clinton. Conway was later appointed as counselor to the president in December. As the Trump administration took office, Conway continued to represent its positions and policies in interviews with news organizations. In the early weeks of the administration, some of Conway's statements raised concerns about perpetuating inaccurate information.

In an interview on Meet the Press just days after President Trump's inauguration, Conway stated that White House Press Secretary Sean Spicer was only offering “alternative facts” when providing incorrect information about the size of Trump’s inaugural crowd. Soon afterwards, aiming to provide backing for the president’s immigration ban geared toward several predominantly Muslim countries, she referred more than once to the "Bowling Green Massacre" in Kentucky, an event which never happened. Conway later admitted she spoke erroneously in an interview with CNN's Jake Tapper in February 2017.

Conway courted controversy again when she appeared on Fox & Friends and discussed Nordstrom dropping the clothing line of Ivanka Trump, the president's daughter. President Trump previously had tweeted that the department store had treated his daughter unfairly. In the Fox & Friends interview, Conway said: "Go buy Ivanka’s stuff. . .It’s a wonderful line. I own some of it. . .I’m going to give a free commercial here. Go buy it today, everybody. You can find it online.”

Conway's endorsement of the clothing line drew bipartisan criticism, and the Office of Government Ethics recommended that she be investigated for violating Standards of Conduct. White House press secretary Spicer said that Conway " had been "counseled on the subject," and Conway said she had spoken to the president about the controversy. "I am just really happy that I spent a lot of time with the president of the United States this afternoon and that he supports me 100 percent," Conway said in a Fox News interview. "All I can say to women, American women at some point in your life you ought to have a boss who treated me the way that the president of the United States treated me today."

Conway encountered legal problems again during the 2017 campaign for Alabama's open Senate seat, for allegedly using her office for partisan politics. According to the Office of Special Counsel, Conway violated the Hatch Act by stumping for Republican Roy Moore during interviews with Fox News and CNN.

While the OSC left disciplinary measures up to the White House, it seemed unlikely that Conway would face punishment. "She simply expressed the president's obvious position that he has people in the House and Senate who support his agenda," said deputy press secretary Hogan Gridley in a statement. "In fact, Kellyanne's statements actually show her intention and desire to comply with the Hatch Act—as she twice declined to respond to the host's specific invitation to encourage Alabamans to vote for the Republican."

Conway married attorney George T. Conway III in 2001, and they have four children.