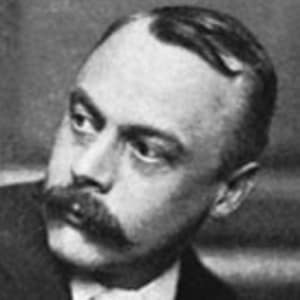 Kenneth Grahame was a Scottish author best known for writing the children’s book The Wind in the Willows.

Kenneth Grahame was born in Edinburgh, Scotland, on March 8, 1859. He worked at the Bank of England while writing in his spare time, authoring several books before achieving success with The Wind in the Willows in 1908. The book was inspired by bedtime stories that Grahame told to his son, Alastair. He ceased writing after Alastair's death in 1920 and died in Pangbourne, England, on July 6, 1932.

Kenneth Grahame was born in Edinburgh, Scotland, on March 8, 1859. When Kenneth was barely a year old, his father accepted a position as the sheriff of Argyll, prompting the family to relocate.

Shortly after Grahame's fifth birthday, his mother died of scarlet fever after giving birth to another son. His father spiraled into alcoholism, losing the capacity to raise his four children. As a result, Grahame and his siblings moved in with their grandmother. His father fought to overcome his drinking problem and regain custody of his children. After he had a significant relapse, however, the children returned to their grandmother's care while their father moved to France. The Grahame children were not in contact with their father after that time.

At the age of 9, Grahame began attending St. Edward's in Oxford. He did well at school, achieving awards in Latin, theology and rugby. Despite his intellectual capabilities, Grahame lacked the money to study at Oxford. He took a job at the Bank of England, where he worked as a clerk. This position brought Grahame to London, where the bank was based.

During his early years in London, Grahame became involved in local literary circles. He started out publishing essays in small publications. He then branched out to publish in literary magazines, including the St. James Gazette, the National Observer and The Yellow Book.

'The Wind in the Willows'

In 1897, Grahame met Elspeth Thompson. They married in 1899. The Grahames had a son named Alastair, who was born with disabilities including blindness in one eye. When Alastair was a young boy, his father invented bedtime stories about a toad to soothe him to sleep. Within a few years, Grahame had written down his stories in letters to his son, adding the characters of Mole, Rat and Badger. He then compiled his stories into The Wind in the Willows. After several rejections, the book was published in October 1908. While the critical reception was chilly, the book was a commercial success. A prominent fan of the book, United States President Theodore Roosevelt, requested to meet Grahame during a 1910 visit to Oxford. Grahame's literary success came at an opportune moment. Having worked at the Bank of England for many years, he took an early retirement in 1908 following a traumatic incident. In 1903, a man entered the bank offices with a pistol. After speaking to Grahame, the man drew his weapon and fired several shots. Grahame was unhurt but was troubled by the incident.

Grahame's professional success did not carry over into his personal life. His marriage was unhappy, and his son, Alastair, grew increasingly troubled through his adolescence. Alastair struggled in school and was ejected from several schools before enrolling at Christ Church, Oxford. In May of 1920, in his second year at Christ Church, Alastair took a walk to the railway running between Oxford and Wolvercote. He was found dead on the tracks the following morning. Although official records described the death as accidental, many signs pointed to suicide. Following the funeral, the devastated Grahames took a long vacation in Italy, away from their home and its memories of their son.

Grahame wrote very little following Alastair's death. In 1924, the Grahames moved to Pangbourne, near Oxford, where they lived out the remainder of their days. Kenneth Grahame died on July 6, 1932, and was buried in Oxford in the same grave as his son, Alastair.