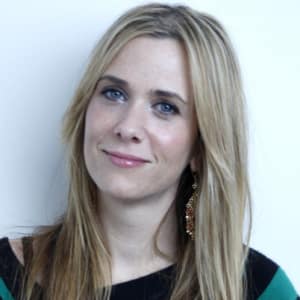 Who Is Kristen Wiig?

Kristen Wiig was born August 22, 1973, in Canandaigua, New York. She debuted on Saturday Night Live in 2005. When Amy Poehler left SNL in November 2008, Wiig became the most senior female cast member on the program. On the heels of her success at SNL, she made her film debut in 2007's Knocked Up, followed by roles in Adventureland, Extract, Whip It and MacGruber. Although she left SNL in 2012, she went on to star in popular films, such as the Oscar-nominated Bridesmaids.

Comedian and actress Kristen Carroll Wiig was born on August 22, 1973, in Canandaigua, New York. Wiig's family moved to Lancaster, Pennsylvania, when she was 3 years old before settling in Rochester, New York. Her parents divorced when she was 9 years old, and Wiig lived with her mother and older brother Erik, who is mentally disabled. Even as a child, Wiig had a quirky sense of humor. She later recalled of her youth, "I used to carry my dad's empty guitar case around the neighborhood because I wanted people to think I played the guitar. I would put Flintstones vitamins in it in case I got tired, so I could pop some and keep walking."

Still Wiig did not discover performing until she was much older. According to the Guardian newspaper, she was terrified of public speaking during her years as a student in Rochester's Brighton High School. Wiig later attended the University of Arizona as an art student. It was there that Wiig, a natural introvert, enrolled in her first acting class. "I was terrified," she said. "I don't really like talking in front of groups of people. Through high school if ever I had to give a speech, I would try to get out of it or not go to school that day… But I took the class, and I liked it, and the teacher was really encouraging for me to keep doing it."

During her time in Arizona, Wiig got a job at a plastic surgery clinic, where she was supposed to produce drawings of clients' post-surgery bodies. The day before she was to start, she found herself alone at the house she shared with roommates in Tucson. "I looked in the mirror and was like, 'OK, if you could do anything, what would it be?' And I thought, 'I would move to L.A. Just try to act,'" she recalled. "The next day, the Jetta was packed and I was gone, freaking out the whole way."

After arriving in Los Angeles, Wiig took a job folding clothes at the store Anthropologie. The string of odd jobs she held over the next few years included selling peaches at a farmer's market, catering Hollywood events, babysitting, working in a floral design shop and selling hot dogs at the mall. She was unsatisfied with traditional acting classes. Then a co-worker took her to a show at the Groundlings, the celebrated improv troupe that launched the careers of Saturday Night Live (SNL) stars like Will Ferrell and Maya Rudolph. Wiig was hooked. "That place changed my life," she said.

Wiig auditioned and got a spot on the Groundlings. Even on a stage full of funny people, Kristen Wiig soon established herself as a standout. She made audiences laugh with characters she'd later bring to SNL, like the over-enthusiastic Target clerk and the crotchety film reviewer Aunt Linda. SNL producer Lorne Michaels caught wind of her talent, and asked her to audition for the program. She was hired midway through the show's 31st season, moving from Los Angeles to New York City on a week's notice.

Kristen Wiig debuted on SNL on November 12, 2005. Her characters—including the one-upping Penelope, squirrelly Gilly, and spot-on impressions of financial advisor Suze Orman and Speaker of the House Nancy Pelosi—became fan favorites. Within two years Wiig established a reputation as the hardest-working comedian on the show, appearing in more sketches per episode than any other cast member. When Amy Poehler left SNL in November 2008, Wiig became the most senior female cast member on the program.

On the heels of her success at SNL, Wiig made her film debut as a scene-stealing passive-aggressive television executive in 2007's Knocked Up. She then went on to star in well-received films like Adventureland, Extract, Drew Barrymore's directorial debut Whip It, and MacGruber, a spinoff of an SNL sketch starring Wiig and fellow cast member Will Forte.

She continued her work in high profile comedy films, such as Despicable Me (2011) and Bridesmaids (2011). Bridesmaids was a hit, both at the box office and critically. For her work in the film, Wiig was nominated for a Golden Globe for Best Actress-Motion Picture, Musical or Comedy. She was also nominated for an Academy Award for Best Original Screenplay for the film. In 2012, Kristen Wiig gave a heartfelt goodbye as she filmed her final episode as a cast member of SNL.

The actress remained prominently involved in film, contributing voice work for the sequels of Despicable Me and How to Train Your Dragon, and starring in the 2016 all-female reboot of Ghostbusters. She also garnered an Emmy Award nomination for the 2014 comedy miniseries The Spoils of Babylon.

In early 2018, Wiig was mentioned as a likely candidate to join production of Wonder Woman 2, in the role of the villainous Cheetah.

Despite her over-the-top characters, Wiig remains fairly shy in real life. She was married to actor Hayes Hargrove from 2005 to 2009, a topic she declines to discuss publicly. She won an Emmy nomination for her work on SNL in 2009, the same year that Entertainment Weekly named her one of the 25 Funniest Actresses in Hollywood. "It's a mystery to me what makes people laugh," Wiig says. "I just try to be as real as possible."