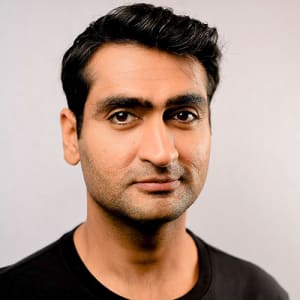 Kumail Nanjiani is a Pakistani-American actor, writer and stand-up comedian who is best known for his work on HBO’s ‘Silicon Valley’ and for his semi-autobiographical rom-com flick ‘The Big Sick.’

Who Is Kumail Nanjiani?

Born in 1978 in Karachi, Pakistan, Kumail Nanjiani moved to the U.S. at the age of 18. A self-described nerd, Nanjiani spent his youth immersed in gaming culture, playing on his Sega Genesis and obsessing over The X-Files. After graduating from college in Iowa, Nanjiani began doing stand-up and later became a podcast host for various video games. He eventually found his way into acting, appearing in small roles on TV and film. His star turn was in 2014 when he was cast as deadpan computer programmer Dinesh on HBO's Silicon Valley. In 2017 he co-wrote and starred in The Big Sick, a semi-autobiographical romantic comedy, which was nominated for an Academy Award for Best Original Screenplay.

Starting out as a stand-up comedian, Nanjiani found his way into acting first on the small screen. Some of the prominent shows he made appearances on were Saturday Night Live (2008), The Colbert Report (2009), Portlandia (2011-2017) and Veep (2013). He had a supporting role on TNT's Franklin & Bash (2011 -2014), in which he played agoraphobic sci-fi nerd Pindar Singh, and a recurring role on Adult Swim's Newsreaders.

Nanjiani's celebrity spanned a much larger audience when he was cast as Dinesh on HBO's Silicon Valley, but he kept busy with other projects, serving as a stand-up comedy host on Comedy Central's The Meltdown with Jonah and Kumail (2014-2016), guest starring on Broad City (2015) and even fulfilling a childhood dream by taking a small role on his favorite television show The X-Files in 2016.

But his biggest film to date is one that hits close to home. Co-written with his wife Emily V. Gordon, The Big Sick is partially based on his real-life courtship with Gordon, who fell into a medically induced coma while the two were dating. The film tells the story of their interracial relationship and how their families come together despite their cultural differences after Gordon (who is played by actress Zoe Kazan) falls ill. (Gordon was diagnosed with adult onset Still's disease, which she has since recovered from.)

The film was critically acclaimed and became one of the most successful indie films of 2017, grossing over $55 million on a $5 million budget.

With the success of The Big Sick, Nanjiani is not only hopeful that he'll see more diversity in rom-coms, but he also points out, he already sees changes going beyond the genre. “It was so exciting to me when I saw Rogue One and I saw Riz [Ahmed] and the good guys were sort of dressed like Middle-Eastern people and it meant so much to me, emotionally," he told The Guardian. "It was unpredictable the way I reacted. It’s something I never thought would happen. For a long time, there was one famous American brown actor. That was Kal Penn [Harold & Kumar]. When I first started doing standup, when people wanted to be racist to me, they would call me him, and now there’s Aziz [Ansari]and Riz and Dev Patel – there’s like a bunch of famous brown peers.”

Among his latest projects, Nanjiani has teamed up with his wife once more to develop a half-hour anthology series called Little America, which delves into the lives of America's immigrants. Described as "funny, romantic, heartfelt, and inspiring," the series will also involve The Office's Lee Eisenberg who will co-write, co-executive produce and serve as show runner and Master of None's Alan Yang will also serve as executive producer.

Nanjiani has been married to Emily V. Gordon since 2007. Before Gordon became a television and film writer, she was a comedy producer and a therapist. Nanjiani met Gordon at one of his stand-up gigs in Chicago while she was still a grad student.

Kumail Nanjiani was born on February 21, 1978 in Karachi, Pakistan to parents Shabana and Aijaz Nanjiani. He attended Karachi Grammar School and his family later relocated to the U.S. when he was 18.

Nanjiani attended Grinnell College in Iowa, graduating in 2001 with a computer science and philosophy degree.