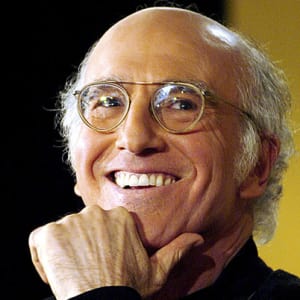 Larry David was born on July 2, 1947, in Brooklyn, New York. In 1982, he was hired as a writer for Saturday Night Live, where he worked for a year. In 1989, Jerry Seinfeld ask David to help him develop a sitcom. David wrote and produced Seinfeld until 1996. He also acted in bit roles. In 1998, he wrote and directed the film Sour Grapes. The following year, he created the critically-acclaimed series Curb Your Enthusiasm for HBO.

Producer, writer and actor Larry David was born Lawrence Gene David on July 2, 1947, in Brooklyn, New York. David attended the University of Maryland and began doing stand-up comedy in New York night clubs in 1974. In 1979, he was hired to write and perform for the comedy variety show Fridays, which was modeled after Saturday Night Live. He stayed with the show until 1982 when he was hired as a writer for Saturday Night Live, where he worked for a year.

In 1989, Larry David received a call from fellow New York comedian Jerry Seinfeld who was working with NBC to develop a comedy pilot. Together, they developed the legendary "show about nothing," Seinfeld, starring Seinfeld, Julia Louis-Dreyfus, Michael Richards and Jason Alexander. Though not initially successful, Seinfeld would become one of the most successful and influential shows in television history. With a talented cast and daring storylines, the show won legions of loyal fans. According to David, the character of George Costanza was modeled after himself: a cheap, neurotic and ultimately selfish bald man.

David wrote and produced Seinfeld until 1996, when he left the show to pursue feature screenwriting. He returned for the season finale in 1998 and made frequent guest appearances throughout the show's run. David also acted in bit roles in Woody Allen's Radio Days (1987) and New York Stories (1989). In 1998, David wrote and directed the feature film Sour Grapes, an irreverent look at the pitfalls of wealth and greed.

The following year, David proved his Midas touch once again when he created the hugely successful semi-scripted series Curb Your Enthusiasm for HBO. Originally airing as a special, the show featured David playing himself as a nervous stand-up comic returning to do a television special after a long absence from the stage. The popularity of the special resulted in a weekly HBO series. Partially improvised, the show proved to be another groundbreaking television experiment winning a Golden Globe in 2003 for Best Comedy Series. The series ended in 2011, when the 80th episode aired and garnered massive attention, only to be picked up again after a five-year gap. In June 2016 HBO announced that Curb was returning for its ninth season.

Asked what he thought about resurrecting his alter ego, David said: “In the immortal words of Julius Caesar, ‘I left, I did nothing, I returned.’”

Besides Curb, David has continued to work as a writer and an actor. In 2012, he appeared in the remake of the series about the classic trio known as The Three Stooges. He also starred in and wrote the made-for-TV movie Clear History (2013), which featured performances by Bill Hader, Jon Hamm and Kate Hudson.

Most recently, David has appeared on SNL numerous times for his impersonations of Democratic presidential nominee Bernie Sanders.

David married Laurie Lennard in 1993. The couple has two daughters.