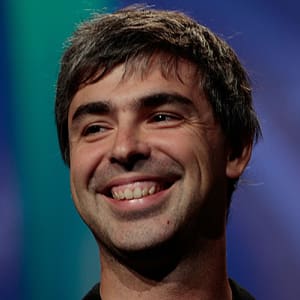 Who Is Larry Page?

Born in Michigan in 1973, Larry Page's parents were both computer experts, so it was no surprise that he studied computer engineering at Stanford University. That's where he met Sergey Brin. Together, Page and Brin developed a search engine that listed results according to the popularity of the pages, calling it "Google." Since launching Google in 1998, the company has become the world's most popular search engine.

Larry Page was born Lawrence Page on March 26, 1973, in East Lansing, Michigan. His father, Carl Page, was a pioneer in computer science and artificial intelligence, and his mother taught computer programming. After earning a Bachelor of Science degree in engineering from the University of Michigan, Page decided to concentrate on computer engineering at Stanford University, where he met Sergey Brin.

As a research project at Stanford University, Page and Brin created a search engine that listed results according to the popularity of the pages, after concluding that the most popular result would often be the most useful. They called the search engine "Google" after the mathematical term "googol," which refers to the No. 1 followed by 100 zeros, to reflect their mission to organize the immense amount of information available on the web.

After raising $1 million from family, friends and other investors, the pair launched the company in 1998. Google has since become the world's most popular search engine, receiving an average of 5.9 billion searches per day in 2013. Headquartered in the heart of California's Silicon Valley, Google held its initial public offering in August 2004, making Page and Brin billionaires.

In September 2013, Page was ranked No. 13 on the Forbes 400 list of the richest people in America. That October, he was ranked No. 17 on Forbes' 2013 "Most Powerful People" list. As Google's CEO, Page shared responsibility for the company's day-to-day operations with Brin, who served as director of special projects for Google, and Eric Schmidt, the company's executive chairman.

On August 10, 2015, Page and Brin announced the creation of a new parent company called Alphabet to oversee Google and other subsidiaries. Page and Brin were set to serve as the new company's CEO and president, respectively, with Sundar Pichai stepping in as Google's top executive.

In March 2018, it was announced that a company personally funded by Page, called Kitty Hawk, had reached an agreement with officials in New Zealand to begin the certification process on a fully electric, self-piloting flying taxi.

Kitty Hawk had been testing its aircraft, nicknamed Cora, over New Zealand since the previous October. With Boeing, Airbus and Uber among the companies looking to break ground in the burgeoning air taxi industry, Kitty Hawk was aiming to have a commercial network of vehicles up and running by 2021.