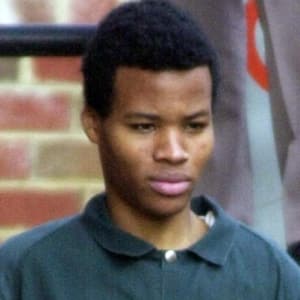 Lee Boyd Malvo was one of the vicious snipers who bred fear in the Washington, D.C. area for more than 20 days in 2002.

Born in Kingston, Jamaica on February 18, 1985, Lee Boyd Malvo had an itinerant childhood with his single mother. He met John Allen Muhammad along the way, who became a father figure. Unfortunately, it was under Muhammad's influence that Malvo learned to shoot and, ultimately, kill. Working with Muhammad, Malvo participated in a series of sniper attacks in the Washington, D.C. area in October 2002. Malvo was later convicted of several accounts of murder, among other charges, and received multiple life sentences. He is currently incarcerated at Virginia's Red Onion State Prison, a maximum security facility.

Lee Boyd Malvo was born on February 18, 1985 in Kingston, Jamaica. Malvo, along with John Allen Muhammad, is infamously known for participating in a shooting spree near Washington, D.C. for three weeks in 2002, and killing 10 people. The son of Una James and Leslie Samuel Malvo, Lee Boyd Malvo spent most of his childhood in Jamaica. With an absent father and a mother who often left him in the care of others, he was shuffled around a lot with little supervision.

Around 1998, Malvo and his mother moved to Antigua. It is believed that Malvo and Muhammad met there. He eventually made his way to the United States in 2001. He lived with his mother in Miami, where Malvo briefly attended high school, and they later moved to Bellingham, Washington. It was in a homeless shelter there that Malvo and Muhammad really began to develop their strange bond. While it was reported that Muhammad and Malvo's mother dated for a time, Muhammad seemed more dedicated to her son. Muhammad became a father figure of sorts to Malvo, playing chess with him, and putting him on  a challenging exercise and diet regimen. A former member of the U.S. military, Muhammad also taught Malvo how to shoot, and they spent hours practicing. Many who knew the pair said that Muhammad appeared to be very controlling of Malvo.

In December 2001, Malvo and his mother were apprehended by the U.S. Immigration and Naturalization Service for being in the country illegally. They were freed a month later, pending a deportation hearing. Malvo caught up with Muhammad soon after, and the two have been linked to a murder that happened that February.

By the fall of 2002, Malvo and Muhammad had begun their deadly tour around the country. They have been tied to four shootings that left three dead and one injured in Maryland and Louisiana in September, and the next month they began their assault on the Washington, D.C. area. Using a rifle and creating their own sniper nest in the trunk of their car, Malvo and Muhammad worked as a murderous team—one selected the victim while the other pulled the trigger. From the car, they killed 10 people and injured three others.

For more than 20 days, people in Maryland, Virginia and the nation's capital were living in fear of the sniper shooters. Many were afraid to pump their own gas or cross a parking lot, as several of the victims had been killed while performing these once-mundane tasks. The police initially had a difficult time getting a handle on the shooting—there appeared to be no pattern, and the victims ranged greatly in age.

After the ninth fatality, Malvo and Muhammad sent a letter to the police asking for $10 million to end their reign of terror. But several calls made by an unknown man who claimed to be the sniper—possibly Malvo or Muhammad—and advised authorities and two priests to check out a robbery-homicide in Montgomery, Alabama, led to a break in the case. Malvo had left a fingerprint on a document that was found at the scene, and ultimately helped authorities solve the case.

On October 24, 2002, police surrounded the vehicle where Muhammad and Malvo were sleeping, and arrested them. Some reports stated that only Malvo's fingerprints were found on the weapon used for most of the shootings. However, Malvo reportedly later testified that Muhammad was the triggerman on the first six shootings.

Because the shootings happened in several different states, there was some discussion as to which one would get to try the pair first. They were tried separately, and much was made of the unusually strong hold that Muhammad had on Malvo during his defense. During his trial, prosecutors produced letters that Malvo wrote to another inmate as evidence that Malvo was no mere puppet of Muhammad's. The letters revealed a more sinister, calculating side to Malvo, as he encouraged a fellow inmate in his writing to look for opportunities to escape and to deceive the authorities. He wrote: "I play the stupid fool. Look at how I act and speak—everybody underestimates me. … It gives me the edge I need to study, conquer and overcome," according to a CNN.com report.

His supposed act didn't fool the jury: In December 2003, Malvo was convicted in the murder of FBI analyst Linda Franklin in Falls Church, Virginia. He was sentenced to life imprisonment without parole. The following year, Malvo reached a plea agreement for the murder and attempted murder of two people in Virginia's Spotsylvania County. For these crimes, he received two more life sentences. In 2009, Malvo was sentenced to life in prison for six murders that he committed, along with Muhammad, in Montgomery County, Maryland.

In a television interview with actor William Shatner in 2010, Malvo stated for the first time that two other men were initially involved in planning the 2002 sniper attacks, but ended up backing out. The interview spurred several news reports and prompted further questioning by police, but Malvo's claims of co-conspirators were later thrown out by investigators.