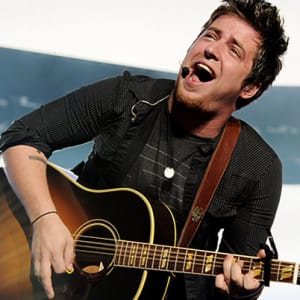 In 2009, singer Lee DeWyze beat out the American Idol judges’ clear choice, Crystal Bowersox, thanks to the audience’s majority vote.

Lee DeWyze was born April 2, 1986, in Mount Prospect, Illinois. He was discovered by a local talent scout and offered a record contract. He formed a band and released his first album in 2007. In 2009, he won the title of American Idol, thanks to the audience's vote. As a result, he also scored a valuable record contract. His first album on his new label was released in October 2010.

Singer Lee Deqyze was born Leon James DeWyze on April 2, 1986, in Mount Prospect, Illinois, to parents Kathleen and Lee DeWyze, Sr. Lee, Jr. had a difficult time in school, and was kicked out of Prospect High School for fighting. He later attended Forest View Alternative School, but he never graduated. To cope with his feelings of estrangement, DeWyze turned to music, teaching himself guitar and drums. He began performing publicly at the age of 16.

DeWyze experienced a stroke of luck at the age of 17, when he was discovered by a local talent scout for the independent music label WuLi Records. The music rep heard DeWyze playing guitar and singing at a Chicago house party, and offered him a record contract on the spot. With the help of WuLi, DeWyze formed the Lee DeWyze Band and released his first album, So I'm Told, in 2007. He released his next album, Slumberland, in 2010.

DeWyze and his group played many local gigs, including a performance at Chicago's House of Blues. In addition, Lee recorded commercial jingles to promote Square One Organic baby foods; judged talent competitions; appeared on local radio stations, and performed at area karaoke joints. But while DeWyze had a certain local celebrity, he was far from national stardom.

To make ends meet, the raspy-voiced artist worked as a paint store clerk in the Mount Prospect area, a job he had held on-and-off from the age of 15. On slow days at the store, DeWyze would bring out his guitar and improvise lyrics about his co-workers and the customers.

Not one to give up on his big dream to be a music star, DeWyze auditioned for the reality music competition American Idol in 2009. He made it onto the show's ninth season, but wasn't seen as a front-runner for much of the competition. Yet as the season progressed, DeWyze came from behind as a fan favorite with covers of Leonard Cohen's "Hallelujah" and U2's "Beautiful Day."

In the final episode, DeWyze beat out the judges' clear choice, Crystal Bowersox, thanks to the audience's majority vote. With his victory, DeWyze not only earned the coveted title of the season's official "American Idol", but he also scored a valuable record contract. His first album on his new label was released in October 2010.