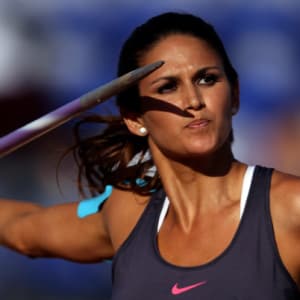 Paraguayan model and javelin thrower Leryn Franco received wide fame after competing in the 2008 Summer Olympics in Beijing, China, but not for her athleticism alone—her good looks are equally, if not more, responsible for her mass appeal.

Born on March 1, 1982, in Asunción, Paraguay, Leryn Franco is a model and Olympic javelin thrower. She competed in the 2008 Summer Olympics in Beijing, China, and placed 51st with a 45.34-meter throw. In 2011, she modeled for Sports Illustrated's Swimsuit Edition.

At age 26, Franco competed in the 2008 Summer Olympics, held in Beijing, China, and placed 51st with a 45.34-meter throw. In June of 2011, however, she beat her Olympic score by nearly 10 meters, throwing a personal best of 55.66 at the South American Championships in Buenos Aires, Argentina.

Though Franco's Olympic debut brought her wide acclaim, she became an international sensation in 2011, when she posed for Sports Illustrated's Swimsuit Edition.