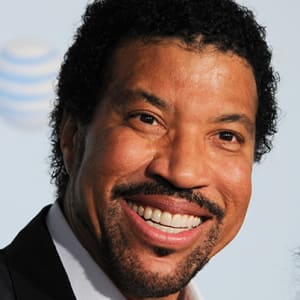 Lionel Richie is an award-winning American singer-songwriter known for creating numerous hits, both with the Commodores and as a solo artist.

Who Is Lionel Richie?

Born in 1949, singer-songwriter Lionel Richie grew up in Tuskegee, Alabama. He was a founding member of the Commodores, a top R&B act of the 1970s, before finding success as a solo artist with the No. 1 single "Truly," from his self-titled debut album. More hits soon followed, including "Hello" and "Dancing on the Ceiling." In 1985, he co-wrote the famine relief song "We Are the World" with Michael Jackson. Richie's later albums include Louder than Words (1996) and Coming Home (2006). He enjoyed renewed chart success with his 2012 country album, Tuskegee, and was named a judge for the 2018 reboot of American Idol.

Having already demonstrated his songwriting chops with the Commodores, and by penning the hit ballads "Lady" (for Kenny Rogers) and "Endless Love" (sung with Diana Ross), Lionel Richie launched his self-titled solo album in 1982. He hit the jackpot with the lead single, "Truly," which surged to No. 1 late in the year, while "You Are" and "My Love" also landed inside the Billboard Top 5.

Richie's next effort, 1983's Can't Slow Down, featured the energetic pop hit "All Night Long" as well as the dreamy ballad "Hello," which featured one of the enduring music videos of the time. The success of this project, which won Richie a Grammy for Album of the Year, helped cement his status as one of music's biggest stars. He performed "All Night Long" at the closing ceremony of the 1984 Olympic Games, held in Los Angeles, California.

'Dancing on the Ceiling'

Richie's third solo album, Dancing on the Ceiling (1986), led off with his Academy Award-winning number "Say You, Say Me," from the 1985 movie White Nights. Its title track gave Richie another No. 1 hit and produced another popular video, while the follow-up singles "Love Will Conquer All" and "Ballerina Girl" also cracked the Billboard Top 10.

Additionally, between his second and third albums, Richie teamed with Michael Jackson to pen the charity single "We Are the World." With industry luminaries like Ray Charles, Bruce Springsteen, Stevie Wonder and Tina Turner joining the cause, "We Are the World" became one of the biggest hits in history, going on to sell more than 20 million copies.

What is Lionel Richie's Net Worth?

Richie's net worth was estimated to be $200 million in 2013. That same year, the IRS issued a tax lien against him for unpaid taxes, which the artist promised would be "handled immediately."

Career with the Commodores

A founding member of the Commodores in the late 1960s, Richie played saxophone and piano and contributed vocals for the R&B group, its growing success in the late 1970s correlating with his developing skills as a songwriter. Richie wrote some of the group's biggest hits, including the ballads "Easy" and "Three Times a Lady," and co-wrote the funk anthem "Brick House."

Richie married his first wife, Brenda Harvey, in 1975. However, their relationship grew strained over the years, leading to an ugly incident in which she was arrested for assaulting him in 1988. They were divorced by 1993. He then remarried two years later, to Diane Alexander, but that union also ended in divorce in 2003.

In the years between chart hits, the crooner became better known as the father of Nicole Richie, his adopted daughter with his first wife. Nicole often appeared in the tabloids with her friend Paris Hilton, with whom she starred on the reality show The Simple Life. She later settled down with musician Joel Madden, giving Lionel his first grandkids.

In 2017, it was announced that Richie would be a judge on the 2018 reboot of the singing-competition show American Idol, alongside pop princess Katy Perry and country hunk Luke Bryan.

The industry veteran seemed ready to throw himself into his role: "For two days a week, Professor Richie is going to talk about the reality of what it takes to be an artist," he told The New York Times. "Instead of sitting here moaning about how the world has changed since I started, I'm going to tell them what it takes. You think it's just singing? No, it's not. What kind of style do you have? What kind of stamina do you have? How many times can you take 'No'? How many times can you come back? That’s an artist."


Lionel Brockman Richie was born on June 20, 1949, in Tuskegee, Alabama. He grew up at the Tuskegee Institute, where two generations of his family worked (including his

grandfather, who knew Booker T. Washington). As he explained to Esquire, the school and surrounding community provided a warm and supportive environment for the young

Richie: "I was born and raised in a community where if somebody can't eat, the whole town goes to feed him," he said.

Early on, Richie toyed with the idea of becoming a priest, but music proved to be his true calling.

Later Albums and Return to the Charts with 'Tuskegee'

However, with Tuskegee (2012), the artist finally enjoyed a return to prominence. Teaming mainly with country-music stars like Blake Shelton, Shania Twain and Willie Nelson, Richie delivered new versions of his greatest hits, propelling the album to the top spot on the Billboard 200.


Showing no signs of slowing down, Richie continued to perform steadily into his 60s, launching the two-year All the Hits, All Night Long Tour in 2013.

He carried that same theme to a Lionel Richie – All the Hits residency at Las Vegas in 2016, continuing his run there between stints at other venues, with artists like Mariah Carey.


In December 2017, Richie earned recognition for his standout career as one of the year's Kennedy Center honorees, along with Gloria Estefan, LL Cool J, Norman Lear and Carmen de Lavallade.

In March of the following year, he joined another exclusive club with a handprint ceremony outside the TCL Chinese Theatre in Los Angeles.