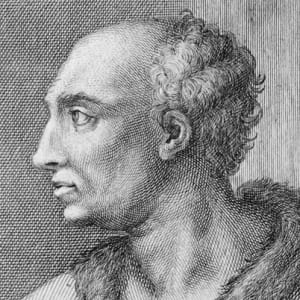 One of the most important early Renaissance sculptors, Ghiberti is best known as the creator of the bronze doors of the Baptistery of Florence.

The son of a goldsmith, in Florence, Italy, Lorenzo Ghiberti would become one of the most influential artists of the early Renaissance. A child prodigy, he received his first commission at age 23. Ghiberti multi-tasked much of his work including the doors for the Florence baptistery and numerous statues. He was a student of humanism and incorporated much of its philosophy into his work.

Lorenzo di Cione Ghiberti was born in Pelago, near Florence, Italy, in 1378 (the exact month and day of his birth are unknown). He was well-trained by his father, Bartoluccio Ghiberti, a well-respected goldsmith in Florence. In 1392, he was admitted to the "Silk and Gold" Guild as an apprentice, and by 1398, had passed his examination to become a guild master goldsmith. In 1400, he traveled to Rimini to escape the plague in Florence and received further training as a painter, assisting in the completion of wall frescoes at the Castle of Carlo I Malatesta.

In 1401, Lorenzo Ghiberti began work for a commission sponsored by the Arte di Calimala (Cloth Importers Guild) to make a pair of bronze doors for the Baptistery of Florence. Six other artists also applied, including Filippo Brunelleschi and Jacopo della Quercia. Ghiberti won the commission with his trial piece of a bronze relief of Abraham's sacrifice of Isaac. The original plan was for the two doors to depict various scenes from the Old Testament, but the plan was later changed to include scenes from the New Testament. Ghiberti was commissioned to work on the baptistery's second set of doors, with the first set completed by artist Andrea Pisano in the early 14th century.

In Ghiberti's piece, each door contains 14 quatrefoil-framed scenes from the life of Christ, the evangelists and the church fathers. In rendering the doors, Ghiberti adopted the linear grace of the early 15th century gothic style of Florence to the expressive power of the newer Renaissance style. The result was a heightened illusion of depth. Completed and installed in 1424, the doors were so highly praised that the Arte de Calimala hired Ghiberti to work on another set of doors.

Over the 20 years that he spent working on the doors, Lorenzo Ghiberti also devoted his time to creating the designs for the stained-glass windows of the Florence cathedral, and served as architectural consultant to the cathedral's building supervisors.

In 1412, the Arte di Calimala gave him another commission: to make a larger-than-life-sized bronze statue of their patron saint, John the Baptist, outside the guild's communal building, Or San Michele (also known as Orsanmichele). A bold undertaking, Ghiberti finished the work in 1416 and was quickly commissioned to do two more similar large bronze statues for the guild. To complete all of this work, Ghiberti operated a smoothly functioning workshop with many assistants.

In 1417, Ghiberti was given a commission to make two bronze reliefs for the baptismal of the Siena Cathedral; this project took him 19 years to complete because he was so busy with his other commissions.

After completing the first set of doors for the Baptistery of Florence, Lorenzo Ghiberti embarked upon a decade of intense exploration of new ways of forming pictorial space and lifelike figures to occupy it. Historians believe that Ghiberti encountered Leon Battista Alberti, a young humanist scholar who, inspired by the art of Florence, composed theoretical treatises on the visual arts. Ghiberti was also influenced by 11th century Arab polymath Alhazen, whose Book of Optics, about the optical basis of perspective, was translated into Italian during the 14th century.

Lorenzo Ghiberti incorporated these techniques into the baptistery's next set of bronze doors, considered his greatest work. Dubbed the "Gates of Paradise" by Michelangelo, each door portrays five scenes from the Old Testament. In the individual panels, Ghiberti used a painter's point-of-view to heighten the illusion of depth. He also extended that illusion by having the figures closer to the viewer extend outward, appearing almost fully round, with some of the heads standing completely free from the background. Figures in the background are accented with barely raised lines that appear flatter against the background. This "sculpture's" aerial perspective gives the illusion that the figures become less distinct as they appear farther from the viewer.

Throughout his career, Lorenzo Ghiberti was actively interested in other artists' work and careers. His workshop was a gathering place for several prominent artists who were on the cutting edge of early Renaissance technology. Whether through collaboration, competitive rivalry or just familiarity with each other's work, each artist influenced the other. Several apprentices working in his shop would later become well-known artists themselves.

Ghiberti was also a historian and collector of classical artifacts. In his Commentarii, a collection of three books that included his autobiography, Ghiberti expounded on the history of art as well as his theories on art and humanist ideals. After a life of building the foundation of Renaissance art and expanding its boundaries, Lorenzo Ghiberti died on December 1, 1455, at the age of 77, in Florence.