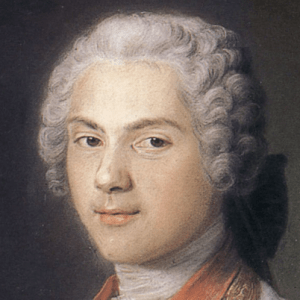 Louis, Dauphin of France, was the only surviving son of King Louis XV. He was the father of three kings of France: Louis XVI, Louis XVIII and Charles X.

With much fanfare, Louis, Dauphin of France, was born heir to the French throne on September 4, 1729. He was prepared well for his eventual rise to the throne, but a falling-out with his father led him to play only a minor role in French politics. Unlike most of his Bourbon counterparts, he was a devoted husband. Though he never took the throne, he and his wife produced three kings of France.

There was much rejoicing among the French population at the birth of Louis, Dauphin of France, on September 4, 1729. Finally, after three daughters, King Louis XV and his wife, Queen Marie Leszczynska, had their heir to the throne. There were also celebrations in other European courts, as the birth ensured stability of French royal rule.

At age 7, Louis, Dauphin of France, was baptized and given the name Louis-Ferdinand. His status as heir to the throne demanded that he have the best of everything, including clothes, education, horses and weapons. Governor and governesses were appointed to assist in his development and needs. Louis took great interest in the military arts at an early age and enjoyed a close relationship with his father up until he was 15. It was King Louis' refusal to allow his son to join the 1744 campaign in the War of the Austrian Succession that bitterly disappointed the dauphin.

During the war, King Louis XV went to the front to lead an army against the allied forces of Austria, Great Britain and the Dutch Republic. He became deathly ill with fever, due primarily to an overindulgent lifestyle. Louis, Dauphin of France, disobeyed orders and went to his father's bedside. The king saw this not as an act of loyalty, but as disobedience and a rash action that could have gotten them both killed. Louis' cold reception of his son resulted in a permanent breach in their relationship.

In 1744, Louis XV negotiated a marriage between the 15-year-old Louis and 19-year-old Infanta Maria Teresa Rafaela of Spain, daughter of King Philip V and his Italian wife Elisabeth of Parma. Louis and Maria Teresa were well matched and had great affection for each other. They had one daughter, Princess Marie Thérèse of France. Three days after giving birth, Maria Teresa died, on July 22, 1746. Louis was only 16 years old and already a widower. He grieved intensely at his loss, but responsibility to provide for the succession of the French crown necessitated he marry again.

On February 9, 1747, Louis married Princess Marie-Josepha of Saxony, the 15-year-old daughter of Frederick Augustus II, Prince of Saxony and King of Poland, and his wife, Archduchess Maria Josepha of Austria. By this time Louis was becoming an adult, well-educated and studious, cultivated in the arts and letters, and a lover of music. He was more comfortable in intellectual conversation than he was hunting and at social functions. As he was with his first wife, Louis was a very devoted husband to Marie-Josepha. This stood in sharp contrast to the decadence of the Bourbon court, in particular his father, who was a notorious womanizer.

Over the next 17 years, Louis, Dauphin of France, and his wife would have eight children, three of whom would go on to become kings of France: Louis XVI, Louis XVIII and Charles X. The dauphin himself would not live to become king. He died of consumption (tuberculosis) on December 20, 1765, at age 36, while his father was still alive. Upon the death of Louis XV, the French monarchy was at its lowest depths politically, financially and morally. The throne passed to the king's grandson Louis XVI, whose ineptitude would lead to the French Revolution and his execution at the guillotine in 1793.