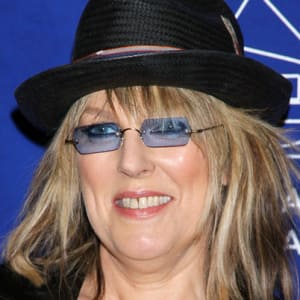 Singer-songwriter Lucinda Williams has won wide acclaim for such albums as 1998’s Car Wheels on a Gravel Road and 2011’s Blessed.

Born in 1953, Lucinda Williams grew up listening to blues, country and folk music. She learned to play guitar and started writing songs in her teens. In 1979, Williams released her first album, Ramblin' on My Mind. She experienced a career breakthrough with 1998's Car Wheels on a Gravel Road. Today, Williams continues to record new material and plays numerous concerts each year.

The daughter of a poet, Lucinda Williams has won a devoted following with her unique blend of country, rock and folk. She learned to play guitar around the age of 12, and aspired to be like Joan Baez. Bob Dylan was another early influence. Through her father, poet and professor Miller Williams, Williams met a number of literary figures, including writer Flannery O'Connor. She also inherited some of her passion for music from her parents—sat a young age, she shared her father's love of country and blues, and her mother's interest in folk music. "My mother played the piano; there was always a piano around the house," Williams told Texas Monthly. "So I had the best of both worlds—words and music."

Moving several times for her father's work, Williams lived in Louisiana, Arkansas, Mexico and Chile, among other places. She demonstrated her strong will as a teenager. In high school, Williams was kicked out for refusing to say the "Pledge of Allegiance." She started her career as folk singer in New Orleans.

Williams moved to Austin, Texas in 1974, and then spent several years playing in both Austin and Houston. In 1979, she released her first album, Ramblin' on My Mind—a collection of traditional songs reflecting her interest in country, folk and blues. Talking to EQ magazine, Williams explained that she developed her confidence as an artist from performing. "I had to learn how to win over an audience. When I first went out, I didn't have a lot of my own songs. I was so shy. But rather than quit, something in me said, 'Okay, I need to work on my craft so that the audience will pay attention.'" And her hard work showed on her next effort, 1980's Happy Woman Blues. The album featured songs penned by Williams herself.

Williams relocated to Los Angeles in the mid-1980s, but the move west proved to be a struggle. No one knew quite what to make of her sound. She was told that she was "too rock for country" and "too country for rock," she explained to The New York Times. Williams also struggled personally around this time, experiencing a short-lived marriage to drummer Greg Sowders.

In 1988, Williams began to attract notice for her distinctive style, earning critical praise for her self-titled album. Her reputation as a singer-songwriter grew when she released Sweet Old World in 1992. Williams also penned "Passionate Kisses," which became a huge hit for Mary Chapin Carpenter in 1993. The song brought Williams her first Grammy Award (for Best Country Song) that same year.

Known for her deeply personal lyrics and penchant for perfection, Williams spent years creating her breakthrough album. She went through three sets of producers to make Car Wheels on a Gravel Road (1998). The record earned raves for its tales of heartache set against a southern backdrop, and it brought Williams another Grammy win—this time for Best Contemporary Folk Album. Around this time, she toured with Van Morrison and longtime inspiration Bob Dylan.

In 2001, Williams bolstered her earlier success with Essence, an album featuring appearances by Billy Bob Thornton and Ryan Adams. She continued to thrive with 2003's World Without Tears, which became her first Top 20 album. With 2007's West, Williams mined darker, more bluesy territory.

Williams has continued to chart her own path in the music world. Her 2008 album, Little Honey, had strong enough sales to make Billboard's Top 10. With her 2011 album, Blessed, the singer-songwriter reached a new point in her career. "I'm more confident about what I do and less afraid to take chances," she told EQ, adding that she had "stretched out to absorb other kinds of stories and material" for her songwriting. "I can't write about unrequited love forever," she continued. Love had apparently finally found Williams in 2009, when she married manager Tom Overby.

For Williams, her musical career has never been about earning gold records—it's been about her art. She has never been afraid to discard takes or even entire songs if they didn't feel right to her. It's her commitment to her own musical truth that seems to endear her critics and her devoted following. "Her songs come from the heart," music executive Bob Buziak told Billboard. "People feel it, embrace it and live vicariously through them, and that's the key."