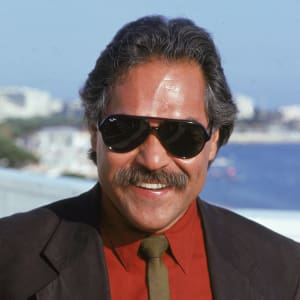 Luis Valdez is an American playwright known for being a pioneer in what’s known as the Chicano movement, particularly in the theater.

Luis Valdez was born in Delano, California, in June 1940. Living the life of a migrant worker, Valdez grew up across California before attending San Jose State College. He began writing plays as an undergraduate and started his own traveling theater company, El Teatro Campesino, after graduating. He soon set down roots with Centro Campesino Cultural in 1967 and settled into a full-time life of activism through both writing plays and hosting cultural events. He has since gone on to write and produce many plays and films, becoming the "godfather of Chicano theater" along the way.

Luis Valdez was born on June 26, 1940, in Delano, California, the second of ten brothers and sisters. Valdez’s parents were migrant farm workers who made a living picking whatever crop was in season, and he was raised in worker camps across California. Valdez began working in the fields at age six, and his entire childhood would color his later creative and activist career dramatically.

Although his early schooling was interrupted continually, Valdez was awarded a scholarship to San Jose State College in 1960. Early on in his college career, Valdez won a playwriting contest for his one-act play, The Theft. At the end of his four years at San Jose, he produced his first full-length play, The Shrunken Head of Pancho Villa (1964), and the next year he joined activist Cesar Chavez to bring attention to the plight of migrant farmworkers.

Valdez combined his love of the theater and his activism to form El Teatro Campesino (Farmworkers Theater), a drama group that represented the struggles of farmworkers and the Chicano movement on a live stage. The troupe traveled via flatbed truck and performed at churches, town squares and near the fields where Valdez grew up. To crystalize the vital tone of his work, Valdez coined the term “acto”—a short play in which its performers are “in the act,” the line between performance and reality blurring. Two notable examples of actos produced during this period are Los vendidos (1967; The Sellouts), which tackled issues intertwined with racial stereotyping, and Bernabe (1970), an early dramatic look at the natural world and man’s place in it.

The Body of Work

Leaving the flatbed truck behind and planting some roots, Valdez founded the Centro Campesino Cultural in Del Rey, California, in 1967 (it moved to Fresno a couple of years later). Through his work there, Valdez became known as the “godfather of Chicano theater," and accolades followed him and his work. He won an honorary Obie Award in 1968 for his “workers’ theater” and continued to write and produce plays, among them La virgen de Tepeyac, 1971; La carpa de los rasquachis (Tent Show of the Underdogs, 1974), Corridos: Tales of Passion and Revolution (1983) and I Don't Have to Show You No Stinking Badges (1986). Valdez also wrote and directed two films for theatrical release: Zoot Suit (1981) and La Bamba (1987), the latter of which was nominated for a Golden Globe for Best Motion Picture, Drama.

Valdez is one of the original organizers for the United Farm Workers Union and a founding member of the California Arts Council. He has been awarded the Presidential Medal of the Arts and was inducted into the College of Fellows of the American Theater at the Kennedy Center for the Performing Arts. He has also won three Los Angeles Drama Critics Circle Awards (1969, 1972, 1978) and an Emmy Award (1973).

In September 2016, President Barack Obama presented Valdez with a National Medal of Arts. At the ceremony, President Obama said Valdez was being honored "for bringing Chicano culture to American drama. As a playwright, actor, writer, and director, he illuminates the human spirit in the face of social injustice through award-winning stage, film, and television productions."