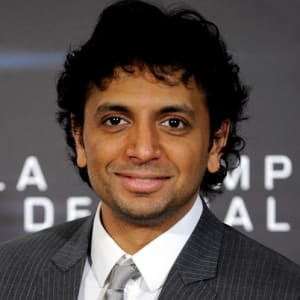 M. Night Shyamalan is a filmmaker and screenwriter known for focusing on supernatural plots. He is best known for directing The Sixth Sense, which was released in 1999 to wide acclaim, including six Academy Award nominations.

Born in India in 1970, M. Night Shyamalan later moved to the United States, where he became a filmmaker and screenwriter known for focusing on supernatural plots. By the time he graduated from New York University in 1993, he had already written, directed and starred in his first full-length feature, Praying With Anger. Shyamalan truly made a name for himself in 1999 with the release of The Sixth Sense, his most well-known film, which went on to garner six Academy Award nominations.

Famed director and screenwriter (and sometimes actor) M. Night Shyamalan was born in Mahé, Pondicherry, India, on August 6, 1970. Shyamalan has spent much of his career thrilling and mystifying audiences with his unusual films. His family moved to the United States when Shyamalan was still a young boy, settling in the suburbs of Philadelphia. The son of two physicians, he dreamed of becoming a filmmaker; he was given a camera at age 10 and made no fewer than 45 short films by the time he was 15. Shyamalan, who was raised a Hindu, attended a Catholic private school and Philadelphia's Episcopal Academy before becoming a film major at New York University's Tisch School of the Arts.

Shyamalan graduated from NYU in 1993. By that time, he had already written, directed, and starred in his first full-length feature, Praying With Anger, the semi-autobiographical story of an Indian-American who returns to India to attend college. Filmed on location, the low-budget independent feature received little notice from either critics or audiences. Shyamalan sold a second screenplay, for a project entitled Labor of Love, to Fox in 1993; the project failed to get off the ground, reportedly because the studio was unwilling to put Shyamalan in the director's chair.

In 1995, up-and-coming independent film studio Miramax bought Shyamalan's screenplay Wide Awake for a reported $250,000, with the conditions that he direct and that the film be shot in Philadelphia. The film, the story of a young boy's search for God after his grandfather dies, got respectable reviews but did not attract a wide audience.

Shyamalan signed on in 1997 to rewrite the screenplay for Stuart Little, the popular family film released in 1999 and featuring Michael J. Fox as the voice for the titular animated mouse. By the time Stuart Little was released over the 1999 holiday season, Shyamalan's third directorial effort, the supernatural thriller The Sixth Sense, had become a critically-acclaimed smash hit, earning more than $600 million worldwide by early 2000. The film, starring Bruce Willis as a child psychologist and 11-year-old Haley Joel Osment as a disturbed boy visited by ghosts, scored six Academy Award nominations, including one for Best Picture and two for Shyamalan himself for Best Director and Best Original Screenplay.

Shyamalan reportedly received $5 million (a record sum for a script written on spec) for his next feature, Unbreakable, also a supernatural thriller. Released in November 2000 and costarring Willis and Samuel L. Jackson, Unbreakable was one of the most anticipated films of the year. Unbreakable did well at the box office, but not as good as Shyamalan's next effort. Signs (2002), starring Mel Gibson and Joaquin Phoenix, brought in more than $400 million worldwide. The film explores one family's encounter with unearthly forces found on their farm.

After the commercial success of Signs, Shyamalan began to flounder as a filmmaker. Townspeople found themselves at odds with the creatures that lived in the woods that surrounded their community in The Village (2004). Despite a strong cast, which included Joaquin Phoenix, Bryce Dallas Howard and William Hurt, the film received mixed reviews. It also failed to match his earlier box office success.

But, by far, Shyamalan's most disappointing film came in 2006. Lady in the Water, a bedtime story of Shyamalan's creation, was widely maligned by critics. He cast himself in one of the film's roles, a part for which he received the dubious distinction of earning a Razzie Award for Worst Supporting Actor. In an interview with Time magazine, Shyamalan said that Lady in the Water "was really the only movie I've made that lost money for the studio. . . . That movie bothered me. I never got a chance to get it to the audience because I didn't know how to sell it."

Shyamalan stepped away from fairy tales to tackle real-life terror in The Happening (2008). This environmental thriller starred Mark Wahlberg and Zooey Deschanel as a couple trying to escape from some type of natural menace. After earning more than $30 million in a strong opening weekend, the film seemed to fizzle out. In 2010, Shyamalan made his bid for a fantasy film franchise with The Last Airbender, based on a popular animated children's television series. Unfortunately, this epic didn't win many fans. Critic Roger Ebert called watching the film "an agonizing experience" and a writer for Variety labeled it "instantly forgettable."

For his next film, Shyamalan set his sights on science fiction. He worked with the real-life father-son team of Will Smith and Jaden Smith on After Earth.

Shyamalan lives in the suburbs of Philadelphia with his wife, Bhavna, whom he married in 1993, and their two children.