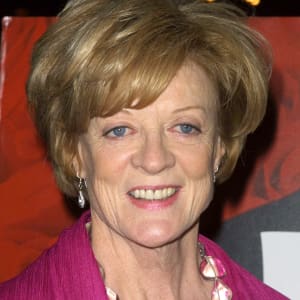 Celebrated British actress Maggie Smith starred opposite Laurence Olivier in ‘Othello’ and won her first Oscar for ‘The Prime of Miss Jean Brodie.’ She has since earned acclaim for her roles in the ‘Harry Potter’ films and ‘Downton Abbey.’

Born on December 28, 1934, in Ilford, Essex, England, Dame Maggie Smith has led a distinguished, varied career on stage, in film and in television over the past six decades. Her achievements range from starring as Desdemona in Othello opposite Laurence Olivier, to winning an Academy Award for her performance in The Prime of Miss Jean Brodie, to memorable roles in the acclaimed television series Downton Abbey and the popular Harry Potter films.

Maggie Smith was born Margaret Natalie Smith in Ilford, Essex, England, to Margaret (Hutton) and Nathaniel Smith. When she was 4 years old, her family moved to Oxford, where her father worked as a pathologist at Oxford University.

After graduating from high school, Smith attended the Oxford Playhouse School from 1951 to 1953. She made her professional stage début in 1952, playing Viola in an Oxford University Dramatics Society production of Shakespeare’s Twelfth Night.

Early Career in Theater and Film

After a brief detour to New York’s Broadway, where she performed in the comedy revue New Faces of 1956, Smith also began to act in film. Her first role was a short, uncredited appearance in Child in the House in 1956, followed by a larger part in the crime drama Nowhere to Go in 1959.

In the 1960s, Smith was active in the National Theatre of Great Britain. She played Desdemona to Laurence Olivier’s Othello in 1964; the two of them reprised their roles in a film version of Othello the following year. While at the National Theatre, she acted in classic dramas by major authors such as Henrik Ibsen and Anton Chekhov.

Smith has received two Academy Awards. She received the first (for best actress) in 1969, for her portrayal of an idealistic, unorthodox schoolteacher in The Prime of Miss Jean Brodie. She won the second (for best supporting actress) in 1978, in honor of her performance in Neil Simon’s California Suite. She has also received British Academy Film Awards for her work, including for her roles in The Prime of Miss Jean Brodie, 1984's A Private Function, 1985's A Room with a View and 1987's The Lonely Passion of Judith Hearne. Additionally, she has received several accolades for her stage performances, including a Variety Club Award for her performance in Noël Coward’s Private Lives in 1972, and a Tony Award for Lettice and Lovage in 1990.

Throughout the 1990s, Smith acted in a diverse range of projects, from the 1993 comedy Sister Act 2: Back in the Habit with Whoopi Goldberg, to the 1997 literary adaptation Washington Square and the 1999 ensemble drama Tea with Mussolini. Her appearance as a snobbish aristocrat in Robert Altman’s Gosford Park (2001) received especially positive notice.

Smith captured the attention of a new generation when she played the strict witchcraft teacher Minerva McGonagall in Harry Potter and the Sorcerer’s Stone (2001). The movie was a huge hit, and Smith reprised the role for six of the seven Harry Potter sequels.

Since 2010, Smith has been acclaimed for her performance as the grandly irrepressible Violet Crawley, Dowager Countess of Grantham, in the period drama Downton Abbey. She has received three Emmy Awards for the role in 2011, 2012 and 2016.

Smith has been married twice. Her first marriage, to actor Robert Stephens in 1967, ended in divorce in 1974. Her two sons with Stephens, Toby Stephens and Chris Larkin, are both actors. In 1975, Smith married writer Beverley Cross, who died of cancer in 1998.

Smith was made a Dame Commander of the Order of the British Empire in 1990.

In 2008, Smith was diagnosed with breast cancer and underwent intensive treatment that included chemotherapy sessions which coincided with the filming schedule for Harry Potter and The Half-Blood Prince.