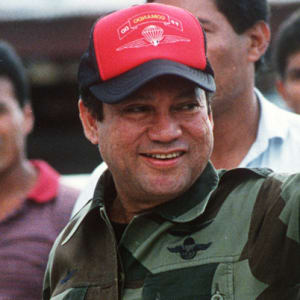 Manuel Noriega served as Panama’s dictator from 1983 until his surrender to the United States in early 1990.

Born into poverty in Panama City, Manuel Noriega rose through the ranks of Panama's military while forging alliances with both the United States and drug cartels. He took control of the country in 1983 as general of the Panamanian Defense Forces, operating as de facto dictator as relations with the U.S. deteriorated. Following the U.S. invasion of Panama, Noriega surrendered in January 1990, and was convicted of drug trafficking charges in an American court in 1992. He served his time in the U.S., France and Panama, until his death from complications from brain surgery on May 29, 2017.

Manuel Antonio Noriega was born on February 11, 1934 (a date that has been disputed), in Panama City, Panama. Primarily raised by a godmother, he attended a top public high school and aimed to become a psychiatrist, though his family's financial difficulties prevented him from going to medical school. Instead, he won a scholarship to a military academy in Peru.

After graduating in 1962, Noriega started his career in Panama's intelligence services. He quickly rose through the ranks, gaining the respect of his fellow officers and the favor of military leader Omar Torrijos, who seized control of the country in 1968. By the 1970s, Noriega had become a strong, trusted source for U.S. intelligence agencies, while simultaneously cutting deals with drug traffickers, like Pablo Escobar.

As he played both sides, Manuel continued to rise in position and rank in his country's intelligence division and became its chief officer. After the death of Torrijos in 1981, Noriega fought for two years to take his place, before emerging as general of the combined Panamanian Defense Forces in 1983. Essentially functioning as Panama's dictator, sans the title, he orchestrated a puppet government throughout the decade, selecting the country's presidents of his choosing.

Noriega remained a useful, if uneasy, ally of the U.S. early in his reign, serving as an intermediary between the Americans and Cuba following the U.S. invasion of Grenada in 1983. However, with evidence mounting over the dictator's murderous dealings with South American drug cartels, the torture and murder of a political rival, and his offering U.S. secrets to Eastern European countries in exchange for money, Congress ended financial and military aid programs to Panama in 1987.

Tensions between the two countries continued to mount, and in 1988, Noriega was indicted in Florida on charges of federal narcotics trafficking and money laundering. After Noriega overtly interfered with his country's presidential election in 1989, the U.S. began taking steps to overthrow the dictator, supporting a failed military coup that fall.

President George H.W. Bush soon took a more straightforward approach: Noting the danger the Panamanian leader posed to American lives, President Bush launched Operation Just Cause on December 20, 1989, which flooded the country with more than 20,000 troops. His defenses overpowered, Noriega officially surrendered on January 3, 1990, at the Vatican Embassy in Panama City. Shortly afterward, the U.S. flew him to Miami to stand trial.

The landmark trial, which marked first time a former foreign head of state faced charges in an American court, commenced in September 1991. Dubbed the "trial of the century" by the U.S. Drug Enforcement Administration, the government relied on testimony from several convicted cocaine felons to make its case. Meanwhile, Noriega revealed details of his years of involvement with the Central Intelligence Agency. He was convicted of eight counts of drug smuggling and racketeering in April 1992, and sentenced to 40 years in prison.

Granted prisoner of war status, Noriega served his time at the Federal Detention Center in Miami, from where he wrote his memoir, America's Prisoner (1997). His sentence was reduced to 30 years in 1999, and in 2007 he stood to be released on parole. However, Noriega had also been convicted in absentia by a Parisian court for laundering drug money, leading to his extradition to France in 2010. A year later he was extradited to Panama to serve 20 years in prison.

His health faltering, Noriega was hospitalized in 2012 after reportedly suffering a stroke. In January 2017, he was temporarily released under house arrest to undergo an operation to remove a benign brain tumor. However, Noriega suffered brain hemorrhaging during the surgery on March 7, and was placed into a medically induced coma. He died on May 29, 2017, at Santo Tomás Hospital in Panama City. He was 83.

After his death, Panama’s President Juan Carlos Varela announced Noriega’s death on Twitter, saying: “The death of Manuel A. Noriega closes a chapter in our history; his daughters and his relatives deserve to bury him in peace.”