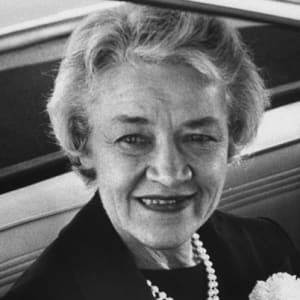 Margaret Chase Smith, a longtime Republican politician from Maine, was the first woman to earn election to both the House of Representatives and the Senate.

Who Was Margaret Chase Smith?

Born in 1897 in Maine, Margaret Chase Smith became one of the prominent voices of 20th century American politics. After taking over her husband's House seat in 1940, Smith carved out a three-decade career as an independent-minded congresswoman and senator, notably supporting women's rights and making a high-profile stand in opposition of Senator Joseph McCarthy's crusade against communism. Honored with the Presidential Medal of Freedom late in life, she passed away in 1995.

Margaret Madeline Chase was born on December 14, 1897, in Skowhegan, Maine. The wife of U.S. Congressman Clyde Smith, Margaret Chase Smith became an important political force in her own right in the 20th century.

After graduating from high school in 1916, Smith worked as a teacher in her hometown’s one-room schoolhouse, but her career in education was short lived. Following a stint as a telephone operator, she joined the staff of the local newspaper, the Independent Reporter, in 1919.

Smith was active in the community, forming the local chapter of the Business and Professional Women’s Club in 1922. She left the newspaper in 1927, and went on to work as a manager at a wool mill.

In 1930, Margaret Smith married Independent Reporter owner Clyde Smith. There was a notable age difference between the two—she was 32 and he was 55—but they shared a mutual interest as strong supporters of the Republican Party.

For several years after her marriage, Margaret Smith served on the Republican State Committee. She left her post to help her husband with his 1936 run for the U.S. House of Representatives. Once he was elected, Smith became his secretary. She handled everything from mundane tasks, such as filing, to helping him prepare his speeches. Unfortunately, her husband died of a heart attack in April 1940. Margaret Smith assumed his position in the House shortly after his passing and held on to the post after winning in a special election that June.

During her eight years in the House of Representatives, Smith demonstrated that she acted according to her conscience instead of simply following the party line. She supported the Selective Service Act of 1940 and voted against the Smith-Connally Anti-Strike Act of 1943, which she believed would hurt her constituents in Maine’s shipyards. Smith also bridged party lines to support President Franklin D. Roosevelt’s New Deal legislation.

A career-long believer in a strong military, Smith toured U.S. bases in the South Pacific as a member of the House Naval Affairs Committee. Additionally, as an advocate for women’s rights, she co-sponsored the Equal Rights Amendment with Congresswoman Winifred Stanley in the mid-1940s, and worked on improving the status of women in the military.

In 1948, Smith successfully won her bid to become a senator, making her the first woman to serve in both chambers of Congress. She served on several committees during her time in the Senate, including the Rules Committee, the Appropriations Committee and the Government Operations Committee. And despite her own opposition to communism, Smith spoke out against Senator Joseph McCarthy's intense persecution of nearly anyone suspected to have communist links.

Delivering a speech called the “Declaration of Conscience” in 1950, Smith said in part, "Those of us who shout the loudest about Americanism in making character assassinations are all too frequently those who, by our own words and acts, ignore some of the basic principles of Americanism—The right to criticize; the right to hold unpopular beliefs; the right to protest; the right of independent thought. The exercise of these rights should not cost one single American citizen his reputation or his right to a livelihood, nor should he be in danger of losing his reputation or livelihood merely because he happens to know some one who holds unpopular beliefs."

The 'Lady From Maine'

Known as the "Lady from Maine," Smith was a skilled diplomat as well as a talented legislator. In the mid-1950s, she traveled the world, visiting with the leaders of 23 nations. Smith also hosted a visit to Maine by President Dwight D. Eisenhower around this time. On the television program Face the Nation, Smith debated well-known liberal and former first lady Eleanor Roosevelt.

In 1960, Smith fended off a challenge for her seat from Lucia Cormier. The landmark election was the first to consist of two women competing against each other for a Senate seat. Four years later, Smith sought the highest office in the country. She tried to become the Republican presidential nominee for president, but eventually lost out to fellow Senator Barry Goldwater.

Reelected to the Senate in 1966, Smith continued to vote based on her own beliefs, not party politics. She opposed two of President Richard Nixon’s picks for the U.S. Supreme Court, Clement Haynsworth in 1969 and G. Harrold Carswell in 1970, contributing to their unsuccessful nominations. In 1972, Smith lost her bid for reelection and was replaced in the Senate by Democrat William D. Hathaway.

After leaving office in 1973, Smith served as a visiting professor for the Woodrow Wilson National Fellowship Foundation. She also helped establish the Margaret Chase Smith Library in her hometown of Skowhegan, where she spent her final years.

Smith died in Skowhegan on May 29, 1995, from complications from a stroke suffered several days earlier.