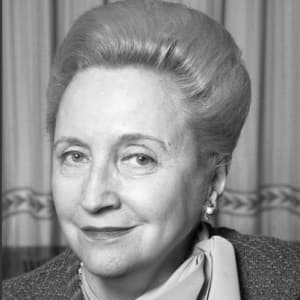 Margaret Truman, daughter of Harry Truman, became a singer and writer in her own right.

Margaret Truman was born on February 17, 1924, in Independence, Missouri. Margaret was attending George Washington University when her father, Harry S. Truman, became the 33rd President of the United States. She became a professional singer, eventually performing at Carnegie Hall and writing 23 novels and nine pieces of non-fiction.

Musician and writer. Born Mary Margaret Truman on February 17, 1924, in Independence, Missouri, the daughter of Harry S. Truman, a county judge at the time, and his wife, the former Bess Wallace. She was in college when her father, who was serving as vice-president, became the 33rd President following the death of Franklin D. Roosevelt in 1945 near the end of World War II.

Margaret pursued a singing career upon her graduation from George Washington University in 1946. She made her professional debut on March 16, 1947, with the Detroit Symphony Orchestra in radio broadcast that drew an estimated 15 million people. Later that year, she made her first appearance on a concert stage before 15,000 people at the Hollywood Bowl. She was accompanied by the 90-piece Hollywood Bowl Symphony, led by legendary conductor, Eugene Ormandy.

In the next few years, she sang in more than 30 cities and appeared at Carnegie Hall in November 1949. After a performance in December 1950, Washington Post music critic Paul Hume wrote that she was "extremely attractive on stage, but cannot sing very well." Her father wrote back to Hume: "I have never met you, but if I do you'll need a new nose and plenty of beefsteak and perhaps a supporter below."

Truman performed on stage, radio and television into the 1950s. She did take a leave from her career in 1948 to campaign for her father in his race against Republican Thomas Dewey. Truman won in what most historians consider the greatest election upset in American history. He left office in January 1953.

In 1956, she wrote her first book, an autobiography Souvenir: Margaret Truman's Own Story. In all, Margaret authored 23 novels and nine books of non-fiction, including biographies of her parents. Her father died in 1972. Four years after her mother's death in 1982, Margaret's biography Bess W. Truman recounted how the former first lady struggled to adjust to life in the White House, feeling "a smoldering anger that was tantamount to emotional separation."

Margaret met Clifton Daniel, who was then assistant to the foreign news editor of The New York Times, at the home of friends in the fall of 1955. On April 21, 1956, they were married in Trinity Protestant Episcopal Church in Independence, the same church where her parents were married in 1919. The Daniels had four sons from 1957 to 1966. The family lived for years on Park Avenue on the Upper East Side of Manhattan. Clifton Daniel died in February 2000 at age 87. Seven months later, their son William, 41, died in a taxi cab collision near his mother's home.