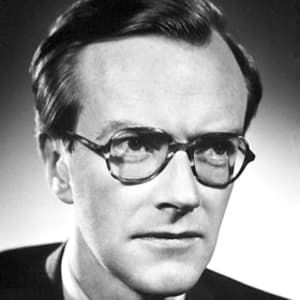 Biophysicist Maurice Wilkins was known for his contributions to the discovery of DNA’s molecular structure, for which he won the 1962 Nobel Prize.

Born on December 15, 1916, in Pongaroa, New Zealand, scientist Maurice Wilkins worked with the Manhattan Project before turning to biophysics. He produced the first image of DNA fibers, which, amidst conflict between he and colleague Rosalind Franklin, contributed to the Watson and Crick double-helix model shared in 1953. Wilkins received the Nobel Prize for his work. He died on October 6, 2004.

Of Irish descent, Maurice Hugh Frederick Wilkins was born on December 15, 1916, in Pongaroa, New Zealand. He and his family moved to England when he was a child, and he went on to attend King Edward IV School before enrolling at the University of Cambridge, St. John's College, where he earned a degree in physics in 1938. He then earned his Ph.D. from the University of Birmingham in 1940.

During World War II, Wilkins worked with his country's defense ministry to improve radar screens. He eventually came to America as he was recruited to work on the Manhattan Project, where the atomic bomb was developed; his particular focus was on isotopes and spectroscopic separation.

Wilkins wasn't interested in the concept of creating a weapon of mass destruction and instead turned to biophysics-based research. He proceeded to work at the University of St. Andrews in Scotland with fellow researcher John Randall, looking at molecular structures via x-ray patterns.

By the mid-1940s, both scientists moved on to King's College London and its Medical Research Council's Biophysics Unit, where Wilkins was able to obtain a picture, via x-ray diffraction, of deoxyribonucleic acid fibers, thus producing the first image of molecular DNA strands.

In 1951, Randall hired scientist Rosalind Franklin to the unit, allegedly leading her to believe that she would head the research on DNA. Set up against each other and having different temperaments, Wilkins and Franklin ultimately did not get along.

Franklin was able to generate newer data on DNA amidst a swirl of conflict between colleagues at different institutions. Wilkins later showed a DNA photo taken by Franklin's graduate assistant on a machine she had refined to competing scientist James D. Watson. He and Francis Crick used the image, along with additional information and their own scientific knowledge, to support their theory of DNA's double helix structure, which was published in 1953.

Watson and Crick hence became widely known for their pioneering ideas, with Franklin and Wilkins appearing to have provided secondary research rather than the original data. Wilkins continued to test the double helix structure theory in his own research.

Franklin died in 1958 at 37 years old. Wilkins, along with Watson and Crick, was awarded the 1962 Nobel Prize in Physiology or Medicine. Wilkins later did a variety of additional work in genetics, including explorations of RNA.

In 1959, Wilkins wed Patricia Ann Chidgey, with the couple went on to have several children. During the '60s and '70s, Wilkins worked as a molecular biology and biophysics professor for King’s College London, as well as becoming the director of its MRC unit, retiring in 1981. Known for his commitment to ethics and humanism in research, he was also president of the British Society for Social Responsibility in Science for more than two decades, starting in the late '60s.

In 2003, Wilkins released his autobiography The Third Man of the Double Helix. He died the following year on October 6, 2004, in London, England.