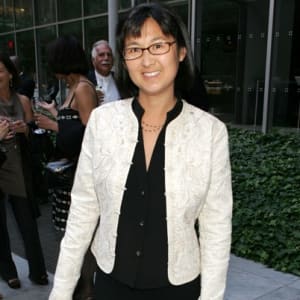 Maya Lin is an American architect and sculptor best known for her design of the Vietnam Veterans Memorial in Washington, D.C.

Maya Lin was born on October 5, 1959, in Athens, Ohio. She received her bachelor's degree from Yale, where she studied architecture and sculpture. During her senior year she won a nationwide competition to create a design for the Vietnam Veterans Memorial. Her minimalist design aroused controversy but has become very popular with the public over the years.

Born on October 5, 1959, in Athens, Ohio, Maya Lin is the daughter of Chinese intellectuals who fled their homeland in 1948, not long before the 1949 Communist takeover. Lin studied architecture and sculpture at Yale University and graduated with a bachelor’s degree in 1981.

In a fateful moment, in her senior year at Yale Lin entered a nationwide competition to design a monument to be erected in honor of soldiers who had served and died in the Vietnam War. And at age 21, she would become an artist to watch when her design took first prize in the contest and the monument she designed was slated to be built at the northwest corner of the National Mall in Washington, D.C.

The design she submitted was in sharp contrast to traditional war memorials: It was a polished, V-shaped granite wall, with each side measuring 247 feet, simply inscribed with the names of the more than 58,000 soldiers killed or missing in action, listed in order of death or disappearance. The monument was graceful and abstract, built to be slightly below ground level, and it eschewed the usual heroic design often associated with such memorials. This, of course, made the work controversial.

As soon as the winning design was unveiled, a group of Vietnam veterans loudly objected to virtually all of its key traits, referring to it ungenerously as the "black gash of shame.” In the end, after much nationwide debate that reached citizens and politicians alike, three realistic figures of soldiers, along with an American flag mounted atop a 60-foot pole, were placed near the monument —close enough to be a part of it but far enough away to preserve Lin’s artistic vision.

After what proved to be a draining experience for Lin, the monument was dedicated and opened to the public on November 11, 1982, Veterans Day. It has since become a massive, and emotional, draw for tourists, with more than 10,000 people per day viewing the work. It has been noted that its polished surface reflects the viewer’s image, making each visitor one with the monument. Of the power of the work, Lin wrote, "I like to think of my work as creating a private conversation with each person, no matter how public each work is and no matter how many people are present.”

For its lasting power, the American Institute of Architects granted the monument its 25-Year Award in 2007.

MLK and a Turn to Nature

After the fervor was over, Lin returned to the academic life, beginning graduate studies in architecture at Harvard University. She left Harvard soon after, though, to work for an architect in Boston, and in 1986 she finished her master’s in architecture back at Yale. Two years later, Lin signed on with the Southern Poverty Law Center to design a monument to the civil rights movement. Again she turned to the power of simplicity in her design. The monument consisted of just two elements: a curved black granite wall inscribed with a quote from Martin Luther King Jr.’s “I Have a Dream” speech and a 12-foot disk inscribed with the dates of major civil-rights-era events and the names of 40 martyrs to the cause. Punctuated with a flowing-water element, the memorial was dedicated in Montgomery, Alabama, in November 1989.

Lin would return to the use of water again in 1993 when she created a monument to commemorate the presence of women at Yale. From there she turned to natural elements more and more, as seen in Ann Arbor’s The Wave Field (1995), Miami’s Flutter (2005) and upstate New York’s Storm King Wavefield (2009), each of which found Lin transforming grassy landscapes into vistas resembling ocean waves.

Amidst these projects, Lin was commissioned to design a work celebrating the bicentennial of the Lewis and Clark expedition (2000). Turning to natural elements once again, Lin created seven art installations along the Columbia River that detailed the historical impact the expedition had on the native peoples and the Pacific Northwest.

Lin has also created a topiary park in Charlotte, North Carolina, in collaboration with landscape architect Henry F. Arnold (Topo, 1991), and an installation of 43 tons of shattered automobile safety glass at the Wexner Center for the Arts in Columbus, Ohio (Groundswell, 1993). Groundswell is significant in that it was Lin's first major work using methods and materials she previously had reserved for small-scale studio works and experiments.

Although chiefly known as a sculptor, Lin also has worked on several architectural projects, which often have been noted for their emphasis on sustainability. Some of the high-profile works in this realm include the Langston Hughes Library (1999) and the Museum of Chinese in America in New York City (2009). Never one to fall into artistic complacency, Maya Lin has also created What Is Missing?, a multimedia, multi-location project that focused on bringing awareness to habitat loss.

For her life’s work, Lin was awarded the National Medal of Arts in 2009, and a film about the artist, Maya Lin: A Strong Clear Vision, won the 1994 Oscar for best documentary. Lin has served as a board member of the National Resources Defense Council and a member of the World Trade Center Site Memorial design jury. In 2016, she was honored with the Presidential Medal of Freedom by Barack Obama.