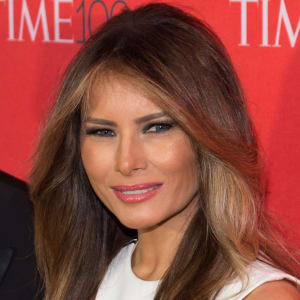 First Lady Melania Trump is the wife of Donald Trump, the 45th president of the United States.

Who Is Melania Trump?

Melania Trump (born Melanija Knavs, Germanized to Melania Knauss) was born on April 26, 1970, in Novo Mesto, Slovenia (then part of communist Yugoslavia). Her father was a car dealer and her mother was a designer for children's clothing. She grew up in a modest home with her younger sister and later discovered she had an older half brother, whom her father had from a previous relationship.

Trump began modeling at age 16, and two years later she signed on with an agency in Milan. She enrolled at the University of Ljubljana, but dropped out after one year to pursue her modeling career.

In her early days of modeling, Trump worked in Milan and Paris, before moving to New York in 1996. There she gained steady work, working with well-known photographers like Patrick Demarchelier and Helmut Newton, and landing covers on magazines such as Harper's Bazaar (Bulgaria), Vanity Fair (Italy), GQ (for which she posed nude in January 2000) and the Sports Illustrated Swimsuit Issue.

Melania met her future husband Donald Trump at a New York fashion party in 1998. Although she first refused to date him, the couple eventually began establishing a relationship and were engaged in 2004. The following year they married in a lavish Palm Beach, Florida, ceremony, with celebrity attendees including Shaquille O'Neal, Barbara Walters, Kelly Ripa, Matt Lauer, Katie Couric, former President Bill Clinton and then New York Senator Hillary Clinton.

When Donald Trump announced his intentions to make a 2016 presidential bid for the White House, the normally private Melania was pushed into the national spotlight along with her past modeling work, some of which was considered racy. One of the first controversial images that began circulating online was her 2000 British GQ spread that had her lying naked on a fur blanket.

The controversy didn't stop there: In July 2016, Melania Trump gave a speech at the Republican National Convention, from which some passages were found to be identical to Michelle Obama's 2008 Democratic National Convention speech. Initially claiming she wrote the speech, Trump was lambasted by the media and the public for plagiarism.

"In working with Melania on her recent first lady speech, we discussed many people who inspired her and messages she wanted to share with the American people. A person she has always liked is Michelle Obama. Over the phone, she read me some passages from Mrs. Obama’s speech as examples. I wrote them down and later included some of the phrasing in the draft that ultimately became the final speech."

Not long after, more controversy followed. On July 30, 2016, the New York Post published nude photos of a then 25-year-old Melania Trump, including one in which she lay in bed with another woman. Many of the photos were published for a men's French magazine that is no longer in circulation.

Discussing the nude photos, Donald told The Post: “Melania was one of the most successful models and she did many photo shoots, including for covers and major magazines. This was a picture taken for a European magazine prior to my knowing Melania. In Europe, pictures like this are very fashionable and common.”

In November, Melania Trump delivered a rare speech on the campaign trail outlining how fighting cyberbullying would be a priority for her if she were to become first lady. “We need to teach our youth American values: Kindness, honesty, respect, compassion, charity, understanding, cooperation,” said Trump. News outlets were quick to point out the irony that her husband was known for his use of the social media platform Twitter to insult opponents.

On November 8, 2016, Donald Trump won the majority of electoral college votes and was elected the 45th president of the United States in a stunning defeat of Hillary Clinton. With her husband’s victory, Melania Trump became the first foreign-born U.S. first lady since Louisa Adams, John Quincy Adams’s wife, who was born in London.

As Donald Trump prepared for his transition to power, he told reporters that Melania and their son Barron would stay in New York City while he moved into the White House, allowing Barron to finish the year at his private school on the Upper West Side of Manhattan. In June 2017, Melania and Barron finally joined the President in the White House.

An early attempt to use the first lady platform for public good generated attention for the wrong reasons: In September, Melania sent a package of Dr. Seuss books to one deserving school in each state as part of National Read-a-Book Day. However, the gift was spurned by a Massachusetts elementary school librarian, who decried both the selection of her school and the choice of Dr. Seuss as a "tired and worn ambassador for children's literature."

The first lady hoped to achieve better results through her passion for combating bullying. In October, she made a surprise visit with Education Secretary Betsy DeVos to Orchard Lake Middle School in Michigan, as part of the #NoOneEatsAlone initiative. "I always believe that you need to treat each other with respect, and kindness and compassion," she told the students.

The following month, the secretive first lady was profiled in Vanity Fair. According to the article, it was Melania who pushed a waffling Trump into announcing his candidacy for president, knowing that he would regret the missed opportunity if he didn't. On the flip side, she supposedly never expected to find herself in the White House. "This isn’t something she wanted and it isn’t something he ever thought he’d win," said one longtime friend of the couple. “She didn’t want this come hell or high water. I don’t think she thought it was going to happen."

Whether or not she ever intended to live in the White House, the first lady went all-out for her first holiday season as a resident there. She publicly revealed her Christmas decorations on November 27, 2017, showcasing her Balsam fir trees draped with "icicles" and trimmed with glass ornaments emblazoned with the seal of each state and territory. The display reportedly came together with the assistance of 150 volunteers from 29 states.

“The President, Barron, and I are very excited for our first Christmas in the White House,” Melania said in a statement. “As with many families across the country, holiday traditions are very important to us. I hope when visiting the People’s House this year, visitors will get a sense of being home for the holidays.”

In January 2018, Melania Trump hired 27-year-old Reagan Thompson, previously an executive assistant on the National Security Council and adviser to Congressman turned CIA Director Mike Pompeo, to serve as her policy director. A spokesperson said the new hire would help prepare and roll out the first lady's official platform in the coming months.

The move came shortly after the publication of the explosive book Fire and Fury: Inside the Trump White House, which described Melania as an unwilling participant in her husband's campaign who broke down in tears the night he was elected. The first lady was reportedly angered by that account and instructed her staff to push back against the book's claims.

More controversy soon surfaced with a report that Donald Trump had been involved with an adult film star a decade earlier, with the starlet allegedly paid to keep quiet just before the 2016 election. The first lady subsequently canceled a trip to attend the World Economic Forum in Switzerland with her husband and kept a low profile for several days, prompting speculation of a rift between the two. Her spokesperson eventually broke the ice by slamming the "salacious & flat-out false reporting" on Twitter, and Melania followed by confirming that she would attend the president's State of the Union address on January 30.

'Be Best' and Border Enforcement

On May 7, 2018, Trump unveiled her platform, "Be Best." The program will focus on three key objectives: well-being, fighting opioid abuse and positivity on social media. "As a mother and as first lady, it concerns me that in today's fast-paced and ever-connected world, children can be less prepared to express or manage their emotions and oftentimes turn to forms of destructive or addictive behavior such as bullying, drug addiction or even suicide," she said. "I feel strongly that as adults we can and should be best at educating our children about the importance of a healthy and balanced life."

The following month, the first lady weighed in on the controversial issue of children being separated from their parents after illegally crossing the Mexican border. Although her husband had blamed Democrats for a law that supposedly mandated such actions, it was part of Attorney General Jeff Sessions's zero-tolerance policy toward preventing illegal entry into the country.

"Mrs. Trump hates to see children separated from their families and hopes both sides of the aisle can finally come together to achieve successful immigration reform," she said in a statement through her spokesperson, Stephanie Grisham. "She believes we need to be a country that follows all laws, but also a country that governs with heart."

A few days later, Trump made an unannounced visit to Upbring New Hope Children's Shelter in McAllen, Texas, to tour the facility and meet with children and staff. However, the visit itself was eclipsed by her decision to wear a jacket emblazoned with the message "I REALLY DON'T CARE, DO U?" before leaving and again after returning to Andrews Air Force Base.

Her spokesperson downplayed the significance of the jacket, insisting there was no hidden message, but the president said it was directed at the "fake news media," tweeting, "Melania has learned how dishonest they are, and she truly no longer cares!"

On May 14, 2018, Trump underwent kidney surgery at Walter Reed National Military Medical Center near Washington, D.C. "Melania Trump underwent an embolization procedure to treat a benign kidney issue. She will likely remain there for the duration of the week,” her office said in a statement. “The first lady looks forward to a full recovery so she can continue her work on behalf of children everywhere.”

Although she was out of the hospital after five days, the first lady continued to lie low in the following weeks, sparking more concern about her well-being. In early June, her spokesperson said that Trump would not be joining her husband at the G7 summit in Quebec that week and there were "no plans" for her to travel to Singapore to meet with North Korean leader Kim Jong-un later in the month.

In early 2018, with the administration aiming to overhaul the nation's immigration laws, Melania's earlier actions as a foreigner seeking to live and work in the U.S. came under scrutiny. She had been granted a green card for permanent residency in March 2001 through the EB-1 program, nicknamed the "Einstein visa" due to its allocation to top academics, business leaders, Oscar-winning actors and others who demonstrate "extraordinary ability." Some critics questioned whether she was deserving of that designation, though others suggested she easily qualified for EB-1 approval.

In August 2018, it was reported that Melania's parents, Viktor and Amalija, had been granted U.S. citizenship. It was also revealed that the first lady had sponsored them for their green cards, a process at odds with the president's proposal of a "merit-based" system that sought to curb sponsorship for family members.

In 2010, Melania Trump launched a jewelry line, as well as a skincare line. She has appeared in an Aflac commercial, co-hosted on The View, and appeared on her husband's NBC reality show, Celebrity Apprentice.

Trump is said to be fluent in the Slovenian, English, French, Serbian and German  languages, with other outlets reporting that she speaks Italian, as well.