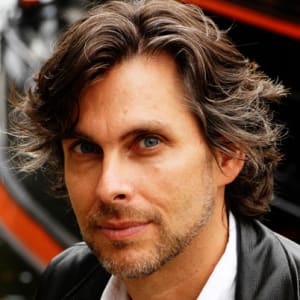 Michael Chabon is an acclaimed, bestselling author who’s won the Pulitzer Prize. He’s known for several books, including The Mysteries of Pittsburgh, and for his work as a screenwriter on Spider-Man 2 and John Carter.

Born on May 24, 1963 in Washington, D.C., Michael Chabon developed his craft as a writer, with his debut The Mysteries of Pittsburgh becoming a bestseller. His 1995 novel, Wonder Boys, was turned into a film, and 2000's The Amazing Adventures of Kavalier & Clay won the Pulitzer Prize. He has published many other novels, stories and essays, and was a screenwriter for Spider-Man 2 and John Carter.

Born on May 24, 1963 in Washington, D.C., Michael Chabon spent part of his childhood growing up in Columbia, Maryland, a planned community meant to promote socio-economic integration and religious diversity. His parents divorced in 1975, and with his father moving to Pittsburgh, Chabon was raised primarily by his mother afterwards. During his youth he became an avid reader of comic books and "genre" fiction while also following major league baseball, particularly admiring Roberto Clemente.

Chabon attended Carnegie Mellon before transferring to the University of Pittsburgh, where he graduated with a Bachelor of Arts degree in English literature in 1984. He went on to earn his Master of Fine Arts in writing from the University of California, Irvine. His debut novel, The Mysteries of Pittsburgh, originally his master's thesis, was released in 1988 and became a New York Times bestseller.

During the early '90s, Chabon released a short-story collection, A Model World, and then published his second novel, 1995's Wonder Boys; the work focuses on a professorial pothead with immense writer's block. The book was adapted several years later into an award-winning film starring Michael Douglas, Frances McDormand, Tobey Maguire, Robert Downey Jr. and Katie Holmes. Chabon ended the decade with another story collection, Werewolves in Their Youth.

Chabon's third novel, The Amazing Adventures of Kavalier & Clay, released in 2000, is a mammoth tale about the creation of a popular comic book superhero—the Escapist—in 1930s and '40s New York City. Kavalier & Clay dealt with a number of hard-hitting issues, including homosexuality and the Holocaust, while also featuring Chabon's wit and flair for epic storytelling; it went on to win many awards, including the 2001 Pulitzer Prize.

The following decade saw Chabon playing with writing styles to continued acclaim from general readers and critics. In 2002, he released his first young adult novel, Summerland, a fantasy tale mixed with baseball lore. And 2004 saw the release of Michael Chabon Presents: The Amazing Adventures of the Escapist, a compilation of different artists and writers presenting the Kavalier & Clay hero in a comic format. Two additional volumes followed soon after, and Chabon's novella, The Final Solution, was also published.

His next novel came forth in 2007, The Yiddish Policemen's Union, presenting an alternate history where Alaska was established as the Jewish homeland instead of Israel. The book became another bestseller for Chabon, and won Nebula and Hugo awards. The formerly serialized novel Gentleman of the Road: A Tale of Adventure was released that same year.

In May of 2008, Chabon put forth his first collection of essays, Maps & Legends: Reading and Writing Along the Borderlands. He gave proceeds from Maps & Legends to the writing nonprofit 826 National, established by novelist Dave Eggers. The following year, his second essay collection was published, Manhood for Amateurs: The Pleasures and Regrets of a Husband, Father and Son, which focused more on his personal life.

Months after the publication of his first children's picture book, 2011's The Astonishing Secret of Awesome Man, Chabon was inducted into the American Academy of Arts and Letters with writer Jonathan Franzen and artist Kara Walker, among others. Then in September 2012, he released the novel Telegraph Avenue, which follows a multiracial cast of entangled relationships as a vinyl record store is threatened by an incoming franchise.

Chabon has contributed to The New York Review of Books, Details and The New Yorker, and has written the essay "Secret Skin: An Essay in Unitard Theory" for the Metropolitan Museum of Art exhibition book Super Heroes: Fashion and Fantasy. He's also worked as a screenwriter on Spider-Man 2 and John Carter, the latter film adapted from the work of one of Chabon's literary heroes, Edgar Rice Burroughs.

Chabon explores a variety of ideas in language that's expansive in its scope, drawing from various genres and experimenting with storytelling structures as in the case of the narrative "Golems I Have Known," a fusion of fact and fiction that he once performed live. His ethnic/spiritual heritage, Judaism, has been a reoccurring theme in his work as well.

Previously married and divorced, Chabon wed fellow writer Ayelet Waldman in 1993. The two have four children and live in Berkeley, California. The pair has also collaborated on a series in development for HBO.