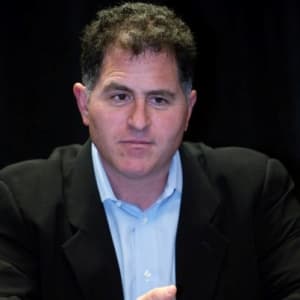 Michael Dell helped launch the personal computer revolution in the 1980s with the creation of the Dell Computer Corporation, now known as Dell Inc.

Born on February 23, 1965, in Houston, Texas, Michael Dell showed an early interest in technology and gadgets. At the age of 15, he purchased an early Apple computer in order to take it apart to see how it worked. In college, he started building computers and selling them directly to people, focusing on strong customer support and cheaper prices. Dell Computer was the world's largest PC maker.

Born on February 23, 1965, in Houston, Texas, Michael Dell helped launch the personal computer revolution in the 1980s with the creation of the Dell Computer Corporation (now known as Dell Inc.), which began in the founder's dorm room at the University of Texas and quickly blossomed into a megawatt computer company. By 1992, just eight years after Dell was founded, Michael Dell was the youngest CEO of a Fortune 500 company.

Dell's success wasn't entirely surprising. While his mother, a stockbroker, and his father, an orthodontist, pushed their son to consider medicine, Dell showed an early interest in technology and business.

A hard worker, Dell landed a job washing dishes at a Chinese restaurant at the age 12 so that he could put away money for his stamp collection. A few years later he harnassed his ability to sift through data to find new customers for newspaper subscriptions for the Houston Post, which earned the high school student $18,000 in one single year.

Intrigued by the expanding world of computers and gadgetry, Dell purchased an early Apple computer at the age of 15 for the strict purpose of taking it apart to see how it worked.

It was in college that Dell found the niche that would become his boom. The PC world was still young and Dell realized that no company had tried selling directly to customers. Bypassing the middleman and the markups, Dell tapped his savings account for $1,000 and started building and selling computers for people he knew at college. His emphasis, however, wasn't just on good machines, but strong customer support and cheaper prices. Soon, he had accounts outside of school and it wasn't long before Dell dropped out and focused all his efforts on his business.

The numbers proved staggering. In 1984, Dell's first full year in business, he had $6 million in sales. By 2000, Dell was a billionaire and his company had offices in 34 countries and employee count of more than 35,000. The following year, Dell Computer surpassed Compaq Computer as the world's largest PC maker.

Overall, Dell's first 20 years proved to be one of the most successful businesses on the planet, surprising such titans as Wal-Mart and General Electric. Dell's story is so compelling that, in 1999, he published a best-selling book about his success, Direct from Dell: Strategies That Revolutionized the Industry.

Intensely private and notoriously shy, Dell has come out of his shell over the years, say those who know him, thanks to his wife Susan, a Dallas native whom he married in 1989. The couple has four children.

Together, the Dells have shown a willingness to spread their wealth. In 1999, the couple started the Michael and Susan Dell Foundation, a large private charity that has doled out millions to causes and people like the tsunami victims in southern Asia. In 2006, the foundation donated $50 million to the University of Texas.

"A bunch of guys sitting around trying to decide what we want to have done with our money after we're dead, that's not a very good idea," he once said, expaling his early entry into philanthropy. "Forget all that. We're going to do this while we're still here and get it right."

In 2004 Dell stepped down as CEO of the company, but he remained chairman of the board. He served on the Foundation Board of the World Economic Forum and the executive committee of the International Business Council. He also was on the U.S. President's Council of Advisors on Science and Technology and sat on the governing board of the Indian School of Business in Hyderabad.

In recent years, however, not everything has gone right for Michael Dell or his company. Poorly built computers resulted in the company taking a $300 million charge to fix the faulty machines, a huge issue for the company that resulted in Dell losing its top perch atop the industry. In an effort to correct things, Dell returned in 2007 as CEO, but the results have been mixed.

Poor products continued to plague the company, and despite Dell Computer's efforts to play down the issue, documents later revealed that employees were well aware of the issues affecting millions of its computers.

In July 2010, Michael Dell made headlines when he agreed to pay more than $100 million in penalties in order to settle charges of accounting fraud that had been filed by the Security and Exchange Commission. According to the charges, Dell Computer inflated its earning statements by counting rebates from the chip maker Intel that were issued to Dell to encourage the company not to use chips from Advanced Micro Devices in its computers and servers. By padding its statements, investigators claimed, Dell Computer had misled investors about its actual earnings.

In a move to help rebuild the company he founded, Dell announced in February 2013 that he would be taking his business private again. He reached an agreement with Silver Lake Partners, a private equity firm that specializes in technology, and computer software giant Microsoft to launch a buyout of all outstanding shares of Dell. This deal has been valued between $23 billion to more than $24 billion, making it one of the biggest buyouts in recent history.

According a Reuters news report, Michael Dell believes "this transaction will open an exciting new chapter for Dell, our customers and team members." Many analysts share some of Dell's enthusiasm, but still think the company is facing serious challenges. Dell has seen its share of the PC market drop in recent years as well as increased competition from tablet and smartphone makers.