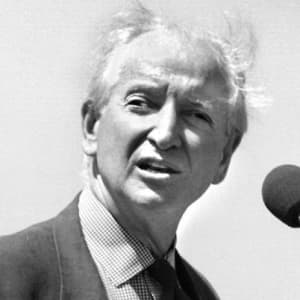 Michael Graves is an American postmodernist architect who designed the Indianapolis Art Center and worked on the restoration of the Washington Monument.

Michael Graves was born on July 9, 1934, in Indianapolis, Indiana. He studied at Harvard University and designed modernist private houses before adopting postmodernism in the 1970s. He’s known for designing such structures as the Portland Building, the Humana Building in Louisville and the Indianapolis Art Center. His other projects include the restoration of the Washington Monument and the creation of a line of items for Target. Graves died in 2015 at the age of 80.

Born in Indianapolis on July 9, 1934, Michael Graves went on to attend the College of Design at the University of Cincinnati, where he earned a bachelor’s degree in 1958. He then attended Harvard and left with his master’s in architecture a year later. In 1960, Graves won the American Academy in Rome’s Rome Prize, which is awarded to a select group of emerging artists and scholars each year. That allowed him to study at the American Academy in Rome for two years (he later became a trustee), and he spent his time immersed in the study of the region’s ubiquitous ancient structures.

Training behind him, in 1962 Graves took a professorship at Princeton University’s School of Architecture, where he made his mark on academia for nearly 40 years. Outside the classroom, Graves was an active modernist architect, and the structures he designed embraced the movement fully, with clean lines and minimal ornamentation. By the end of the decade, Graves was a part of a prestigious group of East Coast architects known collectively as the “New York Five.” But his love affair with modernism wouldn’t last forever, and by the late 1970s Grave turned away from the movement. His first design in his new style was the Plocek House, which was built in 1977 in Warren, New Jersey. With that single building, Graves ushered in a new movement, postmodernism, one that left behind modernism’s coolness in favor of a style that borrowed (lightly) from the classical structures Graves saw while a student in Rome. Graves saw the style as a step forward, and one that would make architecture more approachable as an art form.

Graves expanded on his new work during the 1980s, focusing on a more humanistic approach to architecture, using color in a way that warmed urban landscapes in a way modernist designs would never have dared. Buildings such as the Portland Public Service Building (generally known as the Portland Building) in Oregon and the Humana Building in Louisville, Kentucky (one of his most famous designs), brought public buildings to life with stylized elements and color. His corporate works include the headquarters of the Walt Disney Company in Burbank, California, plus other buildings for Disney around the world, and lines of kitchenware for the Italian company Alessi and retail giant Target.

In 2003, Graves was paralyzed from the waist down after he suffered a spinal cord infection. He then became a force in advocating for the disabled, both through his acts and designs. For his years of accomplishment, Graves received many honors, among them the National Medal of Arts, the American Institute of Architects Gold Medal and the Richard H. Driehaus Prize for Classical Architecture, to name just a few.