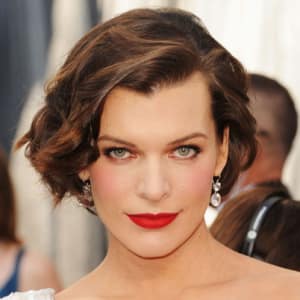 Milla Jovovich was born on December 17, 1975 in Kiev, Ukraine. She started modeling at a young age, landing her first magazine cover at age 11. Combining her exotic looks with an interest in acting, she began a film career as a teen . After early roles in Return to the Blue Lagoon (1991) and Dazed and Confused (1993), she gave a breakthrough performance in 1997's Luc Besson's The Fifth Element. Since then, she has earned a reputation for playing feisty, futuristic action heroines. Jovovich has starred in the Resident Evil films since 2002, and married Resident Evil director Paul W.S. Anderson in 2009. She is also a singer-songwriter, and has released numerous recordings.

Milla Jovovich was born on December 17, 1975 in Kiev, Ukraine (in the former Soviet Union). Her parents, Bogdanovitch Jovovich, a Serbian doctor, and Galina Loginova Jovovich, a Russian actress, moved the family to Sacramento, California when Jovovich was 5 years old. She attended Excelsior High School in Los Angeles.

Jovovich began modeling at a young age. One of her earliest appearances was in a Revlon advertisement, shot by legendary photographer Richard Avedon. She posed for her first magazine cover, for the Italian fashion magazine Lei, at the age of 11.

Soon afterward, Jovovich entered a career in film. She landed her first major part at the age of 15, playing the female lead in 1991's Return to the Blue Lagoon. She also played smaller, memorable roles, including Charlie Chaplin's child-bride in Chaplin (1992) and a guitar-playing hippie in Dazed and Confused (1993).

After a brief hiatus from acting, Jovovich gave a breakthrough performance in the 1996 science-fiction film The Fifth Element, directed by Luc Besson. Jovovich performed alongside Bruce Willis and Gary Oldman, playing Leeloo, an orange-haired, genetically engineered woman with supernatural powers and revealing costumes. She worked again with Besson in the historical drama The Messenger: The Story of Joan of Arc (1999), and took roles in films ranging from Spike Lee's He Got Game (1998) to art-house thriller The Million Dollar Hotel (directed by Wim Wenders, 2000), to the Ben Stiller comedy Zoolander (2001).

Jovovich is the star of the Resident Evil franchise, a science-fiction series based on a popular Japanese video game, directed by Paul W.S. Anderson. In the futuristic world of Resident Evil (2002), an escaped virus turns its victims into flesh-eating mutants; Jovovich plays a military agent named Alice, who combats the zombies as well as the evil Umbrella Corporation. Her fight for survival continues in four follow-up films, released in 2004, 2007, 2010 and 2012.

Though Jovovich has made her mark as an action heroine, she has also appeared in dramatic films, including 2009's A Perfect Getaway and 2010's Stone. Meanwhile, she has continued her modeling career, representing global cosmetics brand L'Oréal since 1998, as well as several other major designers, including Calvin Klein, Donna Karan and Ann Taylor.

Jovovich has long balanced her acting and modeling with other interests. A singer-songwriter, she released her debut album, The Divine Comedy, when she was 18. She continues to release recordings online. From 2003 to 2008, she teamed up with Carmen Hawk to design the women's fashion line Jovovich-Hawk, which was well-received by the fashion world. She is also an active member of several philanthropic groups, including The Foundation for AIDS Research and the Ovarian Cancer Research Fund.

Jovovich has been married three times. Her first marriage, to Shawn Andrews in 1992, ended in an annulment just two months later. She married director Luc Besson in 1997, and the couple divorced two years later, in 1999. In 2009, Jovovich married Paul W.S. Anderson, director of the Resident Evil film series. She and Anderson have one child, daughter Ever Gabo Anderson.