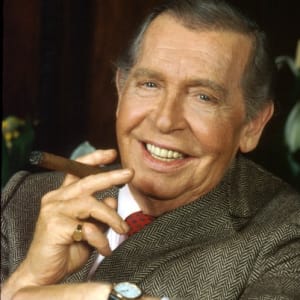 Milton Berle was a Jewish-American comedian who started in vaudeville acts, and was a success in the early days of TV, becoming known as “Uncle Miltie.”

Milton Berle was born on July 12, 1908 in New York City. He began appearing in vaudeville acts at age 10, and later worked as a night-club comedian. Berle's slapstick routines and facial contortions brought him numerous film roles, as well as a role on the television variety show Texaco Star Theater, which was so popular that it became a motivation for some to purchase their first television set. Berle died on March 27, 2002.

Comedy legend Milton Berle was born as Milton Berlinger in New York City on July 12, 1908. He started his career by impersonating Charlie Chaplin at as a young boy. After winning a Chaplin look-alike contest at the age of 5, he began landing film roles. Berle appeared in numerous silent films, including The Mark of Zorro, with Douglas Fairbanks Sr., and Tillie's Punctured Romance, with Charlie Chaplin.

Berle also performed on the vaudeville circuit, sometimes landing on the same bill as Eddie Cantor and Al Jolson. Nearly every step of the way, in his early years, Berle was accompanied by his mother, who was both his manager and biggest fan. According to the The Boston Globe, Berle said that his mother sat in the audience "for every show," adding, "She had a loud laugh. She'd cue the audience, but they never knew it was my mother."

Berle made his first radio appearance in 1934, but he continued to be more famous for his live acts. By the 1940s, he was one of the highest paid night-club performers. He also developed a reputation for being a joke thief, stealing other people's material for his routine—an accusation that he embraced. "Like every comedian, if I heard a joke that I thought would work, I used it," he said in an interview with The New York Times. Journalist Walter Winchell nicknamed Berle "The Thief of Bad Gags."

In the late 1940s, Berle took a gamble on a then-emerging medium—television. His show Texaco Star Theater debuted in 1948, and he quickly became a huge star. Known as "Mr. Television" and "Uncle Miltie," Berle became a weekly fixture in the homes of many Americans, and a motivation for some to purchase their first television set. He joked aggressively with his audience, and seemed to have no limits for getting laughs, including dressing up in women's clothing. The show's writers included Neil Simon, who later found fame as a playwright.

Berle's ratings started to ebb in 1953, and he lost Texaco as a sponsor. When the Buick car company jumped aboard for one season, the show was renamed The Buick-Berle Show. In its final year, however, it was titled The Milton Berle Show. After signing off in 1955, Berle made several attempts to recapture his earlier success, but had no luck. He continued to make guest TV appearances on such shows as The Love Boat and Batman—on which he played a recurring role as the villainous "Louie the Lilac."

Outside of his TV career, Berle continued to thrive as a comedian in Las Vegas, as well as other parts of the country. He performed until December 1998, when he suffered a mild stroke. Rather than go on stage, Berle held court at the Friars Club, a popular haunt for comics in Beverly Hills, California.

A year after being diagnosed with colon cancer, on March 27, 2002, Milton Berle died at his Los Angeles, California home. He was survived by his third wife, Lorna, his two stepchildren, and two children from previous marriages.

Fellow comedian Buddy Hackett remembered Berle as a pioneer. "Whatever you see on television, Milton did it first," Hackett told The New York Times.