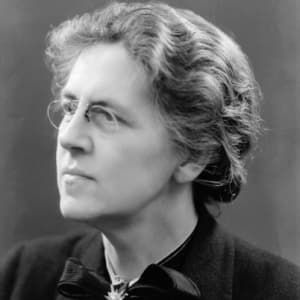 Composer and conductor Nadia Boulanger was the first woman to conduct the Boston and New York Philharmonic orchestras, among others.

Born in Paris in 1887, Nadia Boulanger grew up among the musicians of the Paris Conservatory, where her father taught voice. She composed music until 1918, then turned to conducting. In 1937, she was the first woman to conduct the Royal Philharmonic, and broke the gender barrier with almost every other major orchestra. She also taught an entire generation of composers including Aaron Copland.

As a toddler, Boulanger cried or ran away whenever she heard music. However, she came to embrace what was the family business. In 1897, she became a student at the Paris Conservatory, where the renowned Gabriel Fauré taught her composition. Boulanger finished her conservatory studies in 1904; four years later, her cantata "La Sirène" took second place in the Prix de Rome competition.

It was Boulanger's younger sister, Lili, who in 1913 became the first woman to win the Prix de Rome. After Lili—whose health had always been fragile—died in 1918, Boulanger deemed her own music "useless" and stopped composing. Musical instruction became Boulanger's primary focus.

Boulanger had a profound impact on a large number of musicians and composers, particularly through her work at the American Conservatory in Fontainebleau, France. The well-known figures who learned from her—becoming part of the affectionately nicknamed "Boulangerie"—include Aaron Copland, Walter Piston, Thea Musgrave, Quincy Jones and Philip Glass.

Though her primary focus was on her students, Boulanger also worked as a conductor. A friend and admirer of Igor Stravinsky, she led the 1938 world premiere of his "Dumbarton Oaks Concerto" in Washington, D.C. Boulanger also helped spur interest in the music of Claudio Monteverdi, and made sure that pieces written by her sister and by Fauré, her former teacher, were not forgotten.

When asked for her reaction to being the first woman to conduct the Boston Symphony Orchestra in 1938, Boulanger answered, "I've been a woman for a little over 50 years and have gotten over my initial astonishment."

As Boulanger grew older, she received many accolades, including being named as a grand officier of the Légion d'honneur by Georges Pompidou.

On October 22, 1979, Boulanger died in Paris at the age of 92. Her years of dedication to teaching—one student, Virgil Thomson, described Boulanger as a "one-woman graduate school"—provided her with a lasting musical legacy.