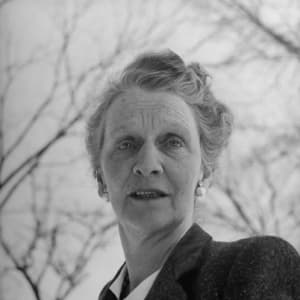 Nancy Astor (1879–1965) was the first woman to serve in the British Parliament, where she advocated temperance, women’s rights and German appeasement.

Nancy Langhorne (born May 19, 1879) took Waldorf Astor, 2nd Viscount Astor, as her second husband in 1906. After the death of his father, she became the Viscountess Astor and took over her husband's seat in the House of Commons, becoming the first woman to serve in the British Parliament. She campaigned for temperance, women's rights, and the appeasement policy to avoid war with Germany in the 1930s.

British politician Nancy Astor, Viscountess Astor, was born Nancy Langhorne on May 19, 1879, in Danville, Virginia. While she married into one of the wealthiest and famous dynasties, Nancy herself was already a notable member of society, having been born into a prominent Virginia family. A young woman, she was known for her good looks. She and her sisters were often called the beautiful Langhorne sisters.

In 1897, Nancy married Robert Gould Shaw, a union that ended in divorce six years later. Astor gained custody of their son Robert and moved to England. Once there, she met William Waldorf Astor, 2nd Viscount Astor (who was usually referred to as Waldorf). The couple married in 1906. Together they had five children: Phyllis (also known as "Wissie"), William Waldorf, Francis David, Michael Langhorne and John Jacob Astor VII.

After Waldorf's father died in 1919, Waldorf inherited the title of viscount and Nancy became a viscountess. That same year, Nancy campaigned to take over her husband's seat in the House of Commons, which is part of Parliament, the English legislature. She won the election, becoming the first woman serve in Parliament.

Nancy was a firm believer in temperance, or moderation of or abstinence from alcohol consumption. She also campaigned for women's rights. Both she and her husband were strong supporters of the British appeasement policy in the 1930s. They believed that war with Germany could be prevented by reaching a settlement. Nancy Astor gave up her seat in Parliament in the mid-1940s.

Besides her political activities, Nancy and Waldorf Astor were leading members of British society and entertained many notable figures, including Prime Minister Neville Chamberlain and writer George Bernard Shaw, at their country home, Cliveden. She also wrote a book about her life in 1920 entitled My Two Countries.

Nancy Astor died on May 2, 1964. With her sharp wit and strong opinions, she broke new ground for women in British politics.