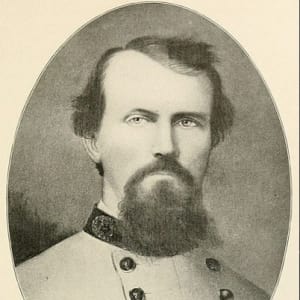 One of the greatest cavalrymen of the Civil War, Confederate general Nathan Bedford Forrest allegedly permitted the massacre at Fort Pillow during the war and was associated with the Ku Klux Klan afterward.

Who Was Nathan Bedford Forrest?

Born July 13, 1821, in Tennessee, Nathan Bedford Forrest was a self-taught man who made his fortune as a cotton planter and slave trader. At the outbreak of the Civil War, he raised a cavalry and fought with distinction through much of the war. Controversy surrounds his degree of responsibility at the Battle of Fort Pillow, where nearly 300 surrendering black soldiers were slaughtered. After the war, he was a businessman and was associated with the Ku Klux Klan. He died in 1877 in Memphis at the age of 56.

Nathan Bedford Forrest was arguably one of the greatest cavalrymen during the Civil War and one of its most controversial figures. Born dirt-poor in the small town of Chapel Hill, Tennessee, on July 13, 1821, he grew up with no education except the backwoods skills of hunting, tracking and survival. His father, William Forrest, a blacksmith, died when Nathan was 16. He went to work for his uncle, Jonathan Forrest, at a tailor shop in Hernando, Mississippi. In 1845, Jonathan Forrest was killed in a street fight over a business dispute. Nathan went after the murderers, killing two and wounding two others.

That same year, Nathan Bedford Forrest married Mary Anne Montgomery. The couple would have two children over the course of their marriage. Forrest soon moved the family to Memphis, Tennessee, where he became a successful planter and owner of a stagecoach company. He seemed to thrive on the gamble and uncertainty in business. He soon made a fortune dealing in cotton, land and slaves and was said to be the richest man in Tennessee at the time. In 1858, he was elected alderman in the city of Memphis.

At the start of the Civil War, Nathan Bedford Forrest enlisted as a private in the Tennessee Mounted Rifles. As more men joined the outfit, Forrest personally purchased guns, uniforms and supplies to equip the unit. He was soon promoted to lieutenant colonel and placed in charge of raising and training his own battalion. In February 1862, Forrest and his troops were cornered by Union general Ulysses S. Grant at Fort Donelson, Kentucky. His command refused to surrender to Grant and Union forces charged in to take the fort. Forrest led 700 cavalrymen through the snow, past the Union lines, and escaped to Nashville where he coordinated evacuation efforts.

Two months later, in the aftermath of the Battle of Shiloh, at Fallen Timbers, Forrest was commending the rear guard of the withdrawing Confederate troops. In an attempt to hit the enemy one more time, Forrest drove deep the advancing Union line far ahead of his own men and found himself surrounded by Union troops. After he emptied his two revolvers, he drew his sabre and began slashing at the oncoming enemy. One soldier stuck his rifle into Forrest’s side and fired, lifting Forrest off his saddle and lodging a mini ball near his spine. Forrest regained control of his horse, remounted and took off. As Union forces shot after him, he reached down and grabbed an unsuspecting Union soldier and brought him up on the back of his horse, then dumping the man to the ground once he was in the clear.

Beginning in December, 1862 and well into 1863, Nathan Bedford Forrest and his cavalry harassed General Ulysses S. Grant’s forces as they prepared for an attack on Vicksburg. Cutting off communication lines and raiding stores of supplies, Forrest relied on guerrilla tactics and never fully engaged the enemy''s superior forces. As result, General Grant was forced to revise his strategy. Eventually, after a six-month siege, Vicksburg fell, but Forrest continued to attack boldly and retreat swiftly, frustrating one Union commander after the other and further expanding his reputation.

The Massacre at Fort Pillow

Nathan Bedford Forrest is also associated with one of the more controversial episodes of the Civil War. On April 12, 1864, Confederate forces had surrounded Fort Pillow, a union garrison near the Mississippi River, occupied by nearly 300 black troops, most newly freed slaves, and nearly the same number of white soldiers. After several hours of continuous rifle and artillery fire by Confederate forces, Forrest sent a note to the Union commander demanding unconditional surrender. The commander asked for an hour to consider the offer. Forrest offered less time and then, fearing the arrival of Union reinforcements, launched a furious assault on the fort.

Many Union and some Confederate sources claimed that Confederate forces entering the fort fired on Union troops as they surrendered. Witnesses reported the rebels shouted “No quarter!” as they shot and bayoneted the Union forces, specifically targeting the black troops as they ran. The Joint Committee on the Conduct of the War (composed primarily of Radical Republicans) concluded that Confederates killed most of the Union soldiers after they had surrendered. In contrast, many of Forrest’s men claimed that Union soldiers kept their weapons and fired back at the Confederates as they fled. Historians agree a massacre did occur, but differ in their conclusions over whether the killing was premeditated or occurred in the heat of battle.

As the war moved on through 1864 and into 1865, Nathan Bedford Forrest experienced some victories and defeats, but neither strong enough to turn the tide of war toward the South or to destroy his army completely. In 1865, Forrest and his men were struggling just to avoid capture. Upon hearing of General Robert E. Lee’s surrender at Appomattox Court House, Forrest chose to surrender his forces in May 1865.

Life after the War

After the war, Nathan Bedford Forrest returned to Memphis, Tennessee, and entered private business as a lumber merchant and planter, later becoming president of the Selma, Marion and Memphis Railroad. In the late 1860s, he associated himself with a fledgling secret society called the Ku Klux Klan and allegedly was its first Grand Wizard, though he later denied any association with the group when testifying before a Joint Congressional Committee in 1871, and again in several newspaper interviews.

In 1874, the railroad company failed and Forrest was forced to sell off many of his assets. He spent his remaining years overseeing a prison camp near Memphis and living with his wife in log cabin salvaged from this plantation. He died on October 29, 1877, reportedly from complications of diabetes.

Remembered by some as a hero of Southern causes, Nathan Bedford Forrest was memorialized in statues and other monuments throughout the region.

In December 2017, amid a heated battle over whether Confederate monuments belonged in public places, a statue of Forrest on horseback was removed from a park in Memphis, Tennessee. The statue had been there since 1904.