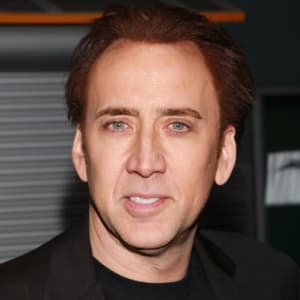 Actor Nicolas Cage, star of such films as Moonstruck and The Rock, is known for his intense on- and off-screen personality, as well as his passion for method acting.

Born in California on January 7, 1964, Nicolas Cage fell in love with acting during a summer class at the American Conservatory Theatre in San Francisco. He got his start in teenage comedies like Fast Times at Ridgemont High and went on to play a wide variety of roles in such films as Raising Arizona, Moonstruck, and Con Air. He received an Academy Award for his role in 1995's Leaving Las Vegas.

Nicolas Cage was born Nicolas Kim Coppola on January 7, 1964, in Long Beach, California, to choreographer Joy Vogelsang and literature professor August Coppola. Cage has two older brothers, Marc and Christopher. He is the nephew of film director Francis Ford Coppola and, as a youth, visited his uncle often at his San Francisco home.

At age 15, Cage fell in love with acting during a summer class at the American Conservatory Theatre in San Francisco. He dropped out of Beverly Hills High School to pursue an acting career, making his debut on television in 1981. He changed his name to Nicolas Cage as a way to separate his identity from that of his famous uncle. He chose the name Cage as a tribute to comic-book superhero Luke Cage.

Cage is known for his edgy, intense personality both on and off the screen, as well as for his passion for method acting. He is said to have had two teeth pulled for his role in Birdy (1984), slashed his arm for Racing With the Moon (1984) and swallowed a live cockroach for Vampire's Kiss (1992). He is also alleged to have destroyed a street vendor's remote-controlled car in a fit of rage while preparing for his role as a mobster in The Cotton Club (1984).

Cage got his start in teenage comedies, with his debut in Fast Times at Ridgemont High (1982, also featuring Sean Penn), followed by a leading role as a punk rocker in Valley Girl (1983). Francis Ford Coppola gave him a small role in his critically acclaimed Rumble Fish (1983). His first serious dramatic role was opposite Matthew Modine in Birdy (1984). This was followed by Coppola's Peggy Sue Got Married (1986), the Coen Brothers' comedy Raising Arizona (1987), Moonstruck (1987, starring Cher), David Lynch's bizarre Wild at Heart (1990), Vampire's Kiss (1992) and the comedy Honeymoon in Vegas (1992).

By 1994, Cage was valued at about $4 million per picture, but agreed to star in Mike Figgis's Leaving Las Vegas (1995) for only $240,000 because of the strength of the role. It paid off- his portrayal of the alcoholic screenwriter earned him a Academy Award and a Golden Globe for Best Actor.

Since 1995, Cage has made a series of action thrillers, including The Rock (1996), Con Air (1997), John Woo's Face/Off (1997, opposite John Travolta), and Brian De Palma's Snake Eyes (1998). In 1998, he starred in the romantic City of Angels with Meg Ryan. After returning to the action genre with the poorly-rated 8MM and headlining Martin Scorsese's dark Bringing Out the Dead in 1999, Cage reportedly received a $20 million paycheck for the action extravaganza Gone in 60 Seconds, costarring Angelina Jolie.

Cage played a more traditional romantic lead in his next two movies, the Christmas 2000 release The Family Man and the World War II-era epic Captain Corelli's Mandolin, starring the much-in-demand actress and Spanish import Penelope Cruz. In December 2002, Cage launched his directorial debut, the $5 million independent film Sonny, about a male gigolo who struggles to free himself from his madam mother. Cage also starred in Adaptation, playing both ill-tempered screenwriter Charlie Kaufman and twin brother Donald. Upcoming projects include costarring with Chow Yun-Fat in director John Woo's action Western Land of Destiny and starring and co-producing Dead to Rights, a movie version of the hugely popular video game. The busy actor also starred in director Jon Turteltaub's 2004 holiday blockbuster National Treasure, playing an archaeologist-historian who believes a treasure map is hidden on the back of the Declaration of Independence.

Cage's relationship with Kristina Fulton, a model, lasted several years, producing a son, Weston Coppola Cage, born in 1992. Cage has been married three times: The first to actress Patricia Arquette in 1995; the second was a short-lived marriage to Lisa-Marie Presley, the only daughter of the late King of Rock and Roll, in August 2002- and most recently, he wed his girlfriend, 20-year-old former waitress Alice Kim, at a private ranch in Northern California in August 2004. The couple announced the birth of a son, Kal-el Coppola Cage, on October 3, 2005.