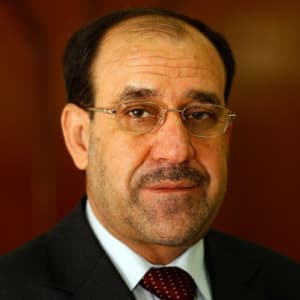 In 2006, Nouri al-Maliki was named prime minister of Iraq. As part of the Islamic Dawa Party, he helped organize activities opposing Saddam Hussein.

Nouri al-Maliki was born on June 20, 1950, in Hindiya, Iraq. In the 1960s, he joined the Islamic Dawa Party in opposition to Saddam Hussein and had to flee the country in 1979. While in exile he became a senior leader and coordinated anti-Saddam activities. He returned to Iraq after Saddam was overthrown and was elected prime minister in 2006. On August 14, 2014, at the height of an insurgency by Islamic State militants, al-Maliki announced he would not seek a third term as prime minister.

Nouri Kamil Mohammed Hassan al-Maliki was born to a middle-class family on June 20, 1950 in the Iraqi town of Hindiya, a small community located 75 miles south of Baghdad. His grandfather was Hasan Abdul Muhassin, a religious cleric, poet and politician who had been a member of the anti-British revolt in 1920. Al-Maliki attended school in Hindiya and received his bachelor's degree in 1973 at Usul al-Din College in Baghdad. (Around two decades later he earned a master's in Arabic literature from Baghdad University.)

After college, al-Maliki lived in Al Hillah and worked in the education department.

In the late 1960s, he joined the Islamic Dawa Party, an armed, political underground resistance movement associated with the Shia sect of Islam, with al-Maliki rising quickly within its ranks. Heading into the 1970s, al-Maliki worked to resist the influence of Saddam Hussein's Baathist leadership.

In 1979, al-Maliki fled Iraq after learning the Hussein government was planning to execute him, along with many other Dawa party members, for their subversive activities. The Iraqi government sentenced him to death in absentia in 1980. Al-Maliki left Iraq via Jordan and moved to Syria, assuming the pseudonym Jawad al-Maliki. In 1982, he left Syria for Tehran, Iran, where he lived until 1990. Later, he moved back to Syria, where he directed guerrilla forces against Saddam Hussein's regime until the 2003 U.S. invasion of Iraq under the administration of George W. Bush.

Following the overthrow of Saddam Hussein in April 2003, former opposition groups began returning to Baghdad. A scramble for power began among the different political factions under the umbrella of American occupation. With the Baathists defeated, two Shia political groups emerged: the Al Dawa party and Muqtada al Sadr's militia group, the Mahdi Army. Al-Maliki was appointed vice president for de-Baathification of the former Iraqi government and military personnel. He was then appointed vice president of the provisional parliament and helped draft the country's constitution.

In January 2005, al-Maliki won a seat to the transitional National Assembly. By May of the same year, Dawa Party leader Ibrahim al-Jaafari was sworn in as interim prime minister. During this time, Iraq plummeted into sectarian violence and civil war. Al-Jaafari's leadership came into question as violence escalated and the country's infrastructure fell into disarray. The crackdown on Baathist civil servants left Iraq with few qualified persons to help run the government. Out of a job and exiled from the political process, many Baathists resorted to insurgency to regain their power. Losing confidence in the prime minister, in April 2006 the Iraqi parliament chose al-Maliki to replace al-Jaafari.

Nouri al-Maliki's appointment to prime minister came among the belief that he was not as close to Iran as his predecessor al-Jaafari, and he had the support of the Kurds. Though he was hard on the Sunnis (particularly anyone associated with the Baathists), it was believed that he was willing to work with the remaining Baathists who had positions in the government. Some in the Bush Administration saw al-Maliki's lack of previous government experience as an indication he lacked political ambition and that he would be compliant to their policies. They seemed to be wrong on both assumptions.

Once in power, al-Maliki worked to help formulate agreements over the government structure and unify different religious and political factions. He solidified his political power by sending Iraqi troops to Basra, the country's second-largest city, to successfully put down a rebellion by Muqtada al Sadr's militia. Later, he played a key role in drafting the Status of Forces agreement with the United States that mandated American forces be out of Iraqi cities by June 2009. As a result of these victories, al-Maliki's reputation soared with Iraqis.

Nouri al-Maliki further consolidated his power by extending the authority and patronage of the Dawa party. He divided most of the national government's 37 cabinet ministries among the political factions in Parliament. These cabinet members, regardless of their political faction, were thus indebted to al-Maliki, giving the Dawa Party near exclusive control of the ministries. To win a broader electoral mandate, he used the massive power of the national government over the provincial governments. Parliament was given national control of the provincial councils' budgets and could vote out any governor, even though the governors were elected locally. Critics of al-Maliki stated that these measures had put a virtual lock on Dawa's control of national and local government.

Known as an eloquent speaker, Nouri al-Maliki was not afraid to voice his opinion. He repeatedly criticized occupying U.S. forces of causing needless civilian causalities and deaths in its attempt to counter the insurgency. He unilaterally ordered troops into Basra to put down the Mahdi Army (followers of Muqtada al-Sadr), without coordinating with the U.S. command. His 2007 visit to Iran raised concern and suspicion among many about his commitment to align Iraq with Western interests. However, it is widely believed that his intent was to defend Iraq from oppression and instability.

Many political analysts have noted that Nouri al-Maliki has managed to serve his country under extremely difficult circumstances, walking a treacherous tightrope in trying to promote peaceful coexistence between three factions: the Kurds, Sunnis and Shia. He has balanced working with U.S. occupation forces while trying to maintain amicable relations with neighboring countries, most notably Iran. Billions of dollars have been poured into rebuilding Iraq, yet the infrastructure of urban areas has been reported to be no better than it was during the days before the invasion. And there are tens of thousands of refugees still in the countryside of Iraq with no allegiance to the government.

Al-Maliki has also been perceived as impotent when dealing with alleged American atrocities. When the private security firm Blackwater was accused of murdering 17 Iraqis, his government tried to prosecute perpetrators and expel the company. However, he was constrained by the agreement of the Coalition Provisional Authority, established in May 2003, that stated Americans were immune from prosecution. Al-Maliki also could not do much more than complain about abuse by U.S military guards at Abu Ghraib and the reported torture of Iraqi prisoners.

In 2008, al-Maliki convinced Sunni members of Parliament to return after a year-long boycott and appointed some to cabinet positions. Probably most important to many Iraqis, by the end of the year al-Maliki successfully negotiated an agreement in which U.S. forces would withdraw from Iraqi cities to military bases in the countryside by the end of June 2009 and that all U.S. troops would leave Iraq by December 2011.

In January 2010, al-Maliki's government was elected to another term. He was widely criticized for clinging to power, with charges of corruption and marginalizing the Sunni minority in Iraq. Critics also blamed his ineffective leadership as a contributing factor in the violent rise of the Islamic State, the militant group formerly known as the Islamic State of Iraq and Syria (ISIS). This fast-moving and brutal insurgency, which began in July 2014, saw the siege of Sinjar Mountain in northern Iraq, which stranded tens of thousands of Yazidis, an ethnic Kurdish religious minority, without food and water. The group has also been the target of ethnic cleansing campaigns by ISIS, with hundreds of Yazidis reportedly massacred as of August 2014.

On August 14, 2014, with pressure from world leaders, his own political party and Iraq's top Shiite cleric Ayatollah Ali al-Sistani, al-Maliki announced he would not seek a third-term as prime minister. His announcement opened a path for new leadership at a crisis point in Iraqi history.