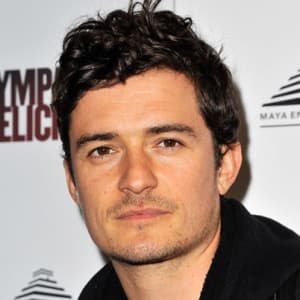 Orlando Bloom is a popular British actor and heartthrob known for his roles in The Lord of the Rings and Pirates of the Caribbean films.

Born on January 13, 1977, in Canterbury, England, Orlando Bloom studied acting as a child before he was cast as the heroic Legolas in Peter Jackson's film adaptation of The Lord of the Rings trilogy. Bloom also found major success starring in three films of the Pirates of the Caribbean franchise with Johnny Depp. He's landed other roles in big-screen fare, including Troy, Elizabethtown and The Three Musketeers.

Brought Up in the Arts

Orlando Bloom was born on January 13, 1977, to Sonia and Harry Bloom, in Canterbury, England, where he grew up with his sister Samantha. The elder Bloom, who worked to depose South Africa's apartheid system, died when Orlando was 4 years old, and the future actor wouldn't find out until his teens that his biological father was actually a family colleague, Colin Stone.

Sonia Bloom encouraged her children to incorporate the arts into their lives, and subsequently, Orlando took part in regional theater in his youth. He moved to London and joined the National Youth Theatre at the age of 16, and then attended the British American Drama Academy. His training led to parts on British television and his film debut in the 1997 Oscar Wilde biopic, Wilde. Bloom continued his training at the Guildhall School of Music and Drama, during which time he regularly performed in stage productions.

While attending Guildhall, Bloom had an almost-crippling accident when he fell three stories from a terrace, trying to cross between two buildings with friends, and broke his back. Though doctors feared that he wouldn't walk again at age 21, Bloom was able to gradually recover after intensive surgery and therapy. Today, the actor remains mindful of his back and core.

'The Lord of the Rings'

Days before his graduation, Bloom was cast in Peter Jackson's adaptation of J.R.R. Tolkien's fantasy trilogy, The Lord of the Rings. The first film of the trilogy, 2001's The Fellowship of the Ring, was a huge blockbuster and critical success. Bloom went on to perform in the two Ring follow-ups; he plays Legolas Greenleaf, a long-haired immortal elf who balances refinement and wisdom with sharp archery and camaraderie, throughout the popular film series.

After garnering a noted role in Black Hawk Down (2001), another big part was on the horizon for Bloom. In 2003, he starred as the sensitive Will Turner in the Disney action/adventure The Pirates of the Caribbean: The Curse of the Black Pearl, alongside Keira Knightley and Johnny Depp. Pirates marked another huge world blockbuster for Bloom, who would go on to star in the next two sequels of the franchise: Dead's Man Chest (2006) and At World's End (2007).

A Mix of Film Genres

Bloom continued doing period work, playing Paris in the 2004 film Troy, which also stars Brad Pitt and Eric Bana. The following year, the actor was featured as a leading man in two films: Ridley Scott's Crusades epic Kingdom of Heaven and Cameron Crowe's drama Elizabethtown (both released in 2005). Then, in 2006, Bloom appeared with actress Zoe Saldana in the thriller Haven, which he also co-produced.

In between his more high-profile Hollywood work, Bloom has starred in indie fare like Ned Kelley (2003) and New York, I Love You (2009). Additionally, in 2007, he returned to the stage for a London revival of In Celebration.

Another cape-and-sword opportunity arose for Bloom when he was cast in a 2011 update of The Three Musketeers, which failed to catch hold at the U.S. box office. The actor then returned to working with Jackson, reprising his role as Greenleaf for portions of The Hobbit film trilogy, the first installment of which was released in December 2012: The Hobbit: An Unexpected Journey.

Bloom enjoys a number of athletic activities, including mountain bike riding and yoga, and once set voyage as a crewmember on a ship to Antarctica. He is also a practicing Buddhist and UNICEF Goodwill Ambassador.

Bloom was linked romantically to actress Kate Bosworth for some time before marrying Victoria's Secret model Miranda Kerr in 2010. The couple welcomed son Flynn Christopher the following year, on January 6, 2011. On October 24, 2013, it was announced that Bloom and Kerr had separated on good terms.