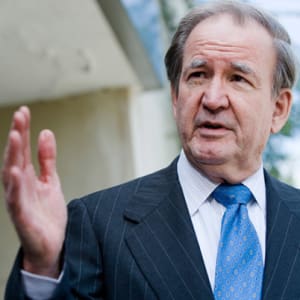 Writer and politician Pat Buchanan is a nationally syndicated columnist and American conservative political commentator who has served under three presidents.

Writer and politician Pat Buchanan is a nationally syndicated columnist. He was twice a candidate for the Republican presidential nomination and the Reform Party's candidate in 2000. He served as President Nixon's speechwriter and President Reagan's White House Communications Director. He coined the term "Silent Majority" and helped shape the strategy that drew millions of Democrats to Nixon.

Born November 2, 1938, in Washington, D.C., Patrick Joseph "Pat" Buchanan is the third of the nine children of Washington accountant William Baldwin Buchanan and his wife, Catherine. Buchanan attended Catholic schools and Georgetown University, graduating in 1961 with a bachelor's degree in English. He earned a master of science from New York City's Columbia University Journalism School in 1962, then began his professional career as a reporter with the St. Louis Globe-Democrat, a conservative newspaper.

Buchanan was soon promoted to editorial writer and by 1964 had become the paper's assistant editorial editor. In 1966, searching for new challenges in his career, Buchanan arranged a meeting with former Vice President Richard M. Nixon, then a partner in a New York City law firm. Impressed with the young reporter's ambition and solid conservative outlook, Nixon hired Buchanan as an assistant and speechwriter in preparation for his upcoming run for the 1968 Republican presidential nomination.

After Nixon’s victory in November 1968 over Democrat Hubert H. Humphrey, Buchanan became special assistant to the president. He wrote speeches for Nixon and for Vice President Spiro Agnew, and planned strategies for the president's successful 1972 reelection campaign, after which he was named special consultant to Nixon. Much of Buchanan's attention during the following two years was diverted to the Watergate crisis, which involved alleged political sabotage by the Republicans during the 1972 presidential campaign.

When Nixon resigned in August 1974, Buchanan stayed on in the White House for several months in the administration of President Gerald R. Ford. In 1975, he began a career as a syndicated political columnist, television and radio commentator, and lecturer. His outspoken style and conservative viewpoint earned him a reputation as one of America's leading spokesmen for right-wing political and social ideologies.

In 1985, Buchanan returned to the White House to work as director of communications at the beginning of President Ronald Reagan's second term. After two years, he resumed his far more lucrative writing and broadcasting career. He has appeared regularly on the political television shows Crossfire and The McLaughlin Group and has hosted his own radio program, Buchanan & Co.

A steadfast critic of Reagan's successor, George H.W. Bush, Buchanan announced his candidacy for the Republican presidential nomination in 1992, when Bush was running for reelection. He won 37 percent of the vote in the New Hampshire primary, but that marked the high point of his electoral support. In the summer of 1992, after his supporters threatened a revolt, he was granted the opportunity to address the Republican national convention. He ran again in 1996, but garnered even less support.

In March 1999, Buchanan announced his third bid for the Republican presidential nomination. Building on his 1992 platform of "America First," he criticized U.S. attempts to broker peace around the globe and denounced what he saw as the undue influence of Israel on American foreign policy. A staunch opponent of abortion, feminism, and the homosexual rights movement, Buchanan also chastised fellow Republicans for moving too far to the middle of the ideological spectrum and called for a return to traditional conservative policies.

On October 25, 1999, with his campaign stalled, Buchanan announced that he was leaving the Republicans to join the Reform Party, a third party created by the Texas billionaire Ross Perot in 1992. Calling the two-party system "a snare and a delusion and a fraud upon the nation," Buchanan presented himself as a decidedly right-wing alternative for conservative voters who viewed the Republican nominee, Texas Governor George W. Bush, as too liberal. If he wins the Reform Party nomination, Buchanan will be eligible to receive $12 million in federal campaign funds, based on Perot's favorable showing in the past two presidential elections.

Buchanan's party-switching maneuver provoked conflict within the Reform Party, as many of the particulars of his "America First" platform, especially his demands for antiabortion and anti-affirmative action legislation—run counter to the more liberal leanings of many party members. Minnesota Governor (and former pro wrestler) Jesse Ventura, the party's major elected figure, publicly disapproves of Buchanan's switch to the Reform ticket.

By the Reform Party's national convention in August 2000, Buchanan had worked determinedly to take over the party organization state by state. Anti-Buchanan party members charged him with fraud and broke from the party to support their own candidate, John Hagelin. As his running mate in his eventually unsuccessful campaign, Buchanan chose Ezola Foster, an African-American public school teacher from Los Angeles and the founder of the right-wing Association for Family Values.

Buchanan is the author of a dozen books to date, including The New Majority (1973), in which he introduced the idea that the beliefs of so-called Middle Americans represent the real majority viewpoint, and not those of the media. Most recently, he articulated his views on foreign policy in the bestselling A Republic, Not an Empire, published in the fall of 1999. In 2009, he published Churchill, Hitler, and "The Unnecessary War": How Britain Lost Its Empire and the West Lost the World and most recently, he published The Greatest Comeback: How Richard Nixon Rose from Defeat to Create the New Majority (2014).

Since 1971, Buchanan has been married to the former Shelley Ann Scarney, whom he met while working in the Nixon White House, where she was a receptionist.