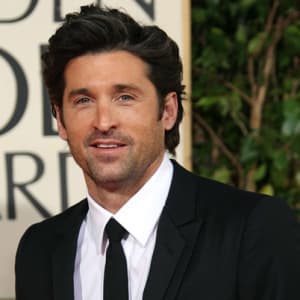 American actor Patrick Dempsey dropped out of high school to tour as a juggler and magician before he found his calling in acting. He began his career on stage but made the transition to television in the 1990s. He is best known for his role as Dr. Derek Shepherd on the hit medical drama Grey's Anatomy. He began taking film roles in 2007. He enjoys auto racing in his spare time.

Actor. Born January 13, 1966 in Lewiston, Maine. The youngest of three children, Dempsey dropped out of high school to tour as a juggler and magician. He eventually segued into theater, performing in several plays including the lead role in Brighton Beach Memoirs in San Francisco and The Subject was Roses in New York City.

During the late 1980s, Dempsey became a teen heartthrob after being cast in the romantic comedies Heaven Help Us, Can't Buy Me Love and Loverboy. He made the transition to television in the 1990s, landing several recurring roles on sitcoms and drama series, including an Emmy-nominated performance for Once & Again in 2001. In 2004, he co-starred in HBO's acclaimed Iron Jawed Angels with Hilary Swank and Anjelica Huston.

In 2005, Dempsey took on the role of Dr. Derek Shepherd — also known as "Dr. McDreamy" — on the hit medical drama Grey's Anatomy. The series debuted on ABC as a midseason replacement and has since become one of the most highly rated shows on television. Audiences have adored his portrayal of the sensitive doctor and been intrigued by the on-again, off-again relationship between his character and Dr. Meredith Grey played by Ellen Pompeo. Dempsey has earned both a Screen Actors Guild Award and a People's Choice Award for his work on the series.

Not everything on the hit show has run smoothly, however. Dempsey got into a dispute with cast member Isaiah Washington in 2006 after Washington made a derogatory comment about the sexuality of another actor on the show. The two were said to have patched things up later, and Washington left the series in 2007.

In addition to his work on Grey's Anatomy, Dempsey has taken on a few film roles. He reunited with former co-star Hilary Swank for Freedom Writers (2007). In this drama, Swank played a teacher trying to improve the lives of her at-risk youths and Dempsey appeared as her husband. In his next film project, he has taken on lighter fare — a romantic comedy with a fantastical twist. Dempsey stars in Enchanted (2007) as a lawyer who falls for a princess from long ago who has been sent to modern times by an evil queen.

Dempsey was married to actress and manager Rocky Parker from 1987 to 1994. He married make-up artist Jillian Fink in 1999; the couple has a daughter, Talula Fyfe, and twin boys, Darby Galen and Sullivan Patrick. In January 2015, after nearly 15 years together, Fink filed for divorce.

Besides acting and spending time with his family, Dempsey also loves to race cars.