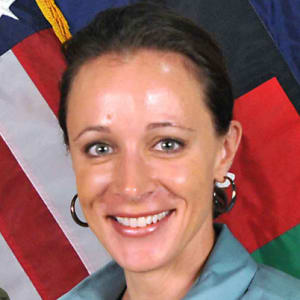 Author Paula Broadwell made headlines in 2012, when her extramarital affair with U.S. General David Petraeus was uncovered.

Born in North Dakota on November 9, 1972, Paula Broadwell attended the U.S. Military Academy at West Point. She served in the U.S. Army and the Army Reserves for 15 years and also earned a master's degree from University of Denver in 2006. Broadwell studied the career of General David Petraeus as part of her dissertation. Her work formed the basis for the 2012 biography All In: The Education of David Petraeus. Broadwell also had an affair with Petraeus, which came to light later that year.

Paula Broadwell was born Paula Dean Kranz on November 9, 1972, in North Dakota. Broadwell grew up in Bismarck, North Dakota, where she excelled at both sports and politics, becoming active in basketball and student government at Century High School. After graduating in 1991, Broadwell attended the U.S. Military Academy at West Point. There, she continued to thrive both academically and athletically, earning varsity letters in cross country, indoor and outdoor track.

Broadwell went on to serve in both the U.S. Army and the Army Reserves, eventually becoming an expert on military intelligence. According to the Penguin Speakers Bureau's website, Broadwell "lived, worked or traveled in more than 60 countries during more than 15 years of military service and work in geopolitical analysis and counterterrorism and counterinsurgency operations."

She also devoted some of her time to academic pursuits, earning a master's degree in international studies from the University of Denver in 2006, followed by another master's degree from Harvard University's John F. Kennedy School of Government. While studying at Harvard, Broadwell met General David Petraeus. (The pair spoke after Petraeus gave a lecture at the university.)

Later pursuing a doctorate at King's College in London, Broadwell turned to Petraeus for help with her research, and she studied his military career as part of her dissertation. She spent nearly a year with Petraeus, observing his military leadership firsthand. In 2010, she embedded with his troops in Afghanistan, soon becoming close friends with many of the soldiers; she and Patraeus had become close prior to Broadwell's travels in the Middle East.

Broadwell's academic examination of Petraeus soon evolved into an official biography. Co-written with journalist Vernon Loeb, Broadwell published All In: The Education of General David Petraeus in early 2012. The book became a best-seller, and Broadwell appeared on several television shows to promote her work. She even challenged Jon Stewart, host of The Daily Show with Jon Stewart, to hold a push-up competition to help raise funds for wounded soldiers.

Broadwell eventually became more than professionally interested in her subject: After Petraeus took over as director of the CIA in 2011, he and Broadwell became romantically involved. The FBI became aware of the extramarital affair (Broadwell is married to Dr. Scott Broadwell, and Petraeus has been married to wife Holly Knowlton since 1974) after investigating some of anonymous threatening emails sent to Jill Kelley, a friend of Petraeus. These messages were traced back to Broadwell, and her emails with Petraeus detailing their affair were uncovered. Petraeus publicly acknowledged his affair with Broadwell on November 9, 2012, when he resigned from his post with the CIA. It was later revealed that Petraeus had also revealed classified governmental information to Broadwell while his biography was being written.

Broadwell has been keeping a low profile since the news of her affair with Petraeus broke. She and husband Scott Broadwell, a radiologist, have two sons together. They live in Charlotte, North Carolina.