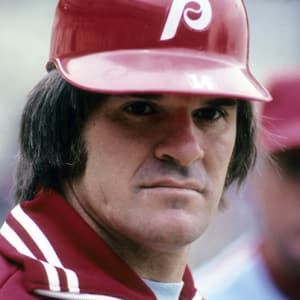 American baseball star Pete Rose established a career record for hits before earning a lifetime suspension for gambling on the sport.

Pete Rose was born on April 14, 1941, in Cincinnati, Ohio. Known as "Charlie Hustle" for his hard-charging style, he became one of the greatest players in the history of professional baseball and retired as the all-time leader in hits, games and at-bats. An investigation revealed that Rose had bet on games while serving as a manager, earning him a permanent suspension from the sport.

Peter Edward Rose was born on April 14, 1941, in Cincinnati, Ohio, and grew up in nearby Anderson Ferry. His dad, Harry—also known as "Big Pete"—had been a boxer and a semipro football player, and Rose credited him as the model for what would become his intense, hard-charging style. After playing football and baseball at Western Hills High School, Rose signed with the hometown Cincinnati Reds.

Nicknamed "Charlie Hustle" by All-Star Yankees pitcher Whitey Ford, Rose made his major league debut in 1963 and went on to win the National League Rookie of the Year award. In the ensuing years, the switch-hitter would establish himself as one of the best players in baseball. Rose surpassed 200 hits for the first of a record 10 times in 1965, notched batting titles in 1968 and '69, and won Gold Gloves for his outfield defense in '69 and '70.

Rose also rubbed some the wrong way with his intensity. He separated Cleveland Indians catcher Ray Fosse's shoulder in a home-plate collision during the 1973 All-Star game, and sparked a brawl with his hard slide into Mets shortstop Bud Harrelson during the 1973 playoffs. But there was no denying his greatness—that same season, Rose won his third batting title and was named the NL Most Valuable Player.

Rose starred for the "Big Red Machine" Cincinnati teams that won back-to-back World Series championships in 1975 and '76, and set an NL record with a 44-game hit streak in 1978. After signing with the Philadelphia Phillies as a free agent, he helped them win their first World Series in franchise history in 1980.

Rose spent half of a season with the Montreal Expos in 1984, then returned to Cincinnati as player-manager. On September 11, 1985, he recorded career hit No. 4,192 to break the 57-year-old record held by baseball great Ty Cobb. Rose ended his playing career after the 1986 season with 4,256 total hits, and also held the all-time records with 3,562 games played and 14,053 at-bats.

Rose continued to serve as manager of the Reds, but after suspicions arose about his gambling habits, the Commissioner's office hired former Justice Department prosecutor John Dowd to launch an investigation. Dowd uncovered evidence that Rose had bet on baseball games, and on August 23, 1989, Commissioner Bart Giamatti suspended Rose from baseball for life.

Rose landed in more trouble the following year, earning a five-month sentence in a Federal correctional institution for tax evasion.

Rose applied for reinstatement to baseball in 1997, and after years of denying the charges, he finally admitted to betting on games just before the release of his 2004 autobiography, My Prison Without Bars. The "Hit King" remains in exile from the sport, and he regularly signs autographs at a Las Vegas memorabilia store and makes television and radio appearances as he waits for his chance at redemption.