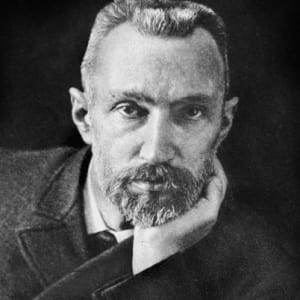 French physicist Pierre Curie was one of the founding fathers of modern physics and is best known for being a pioneer in radioactive studies.

French physicist Pierre Curie was one of the founding fathers of modern physics and is best known for being a pioneer in radioactive studies. He and his wife, Marie Curie, won the Nobel Prize in Physics in 1903, and the curie, a unit of radioactivity, was named after him. Curie died in 1906 after being run over by a horse-drawn carriage in Paris.

Pierre Curie was born in Paris, France, on May 15, 1859. His father, a physician, trained him in math and science from a young age. Curie then entered the Faculty of Sciences at the Sorbonne, where he earned his degree in 1878. Lacking the money to continue on in school, Curie worked as a laboratory instructor until he was able to return to his research. In 1895, he obtained his graduate degree and was appointed professor of physics. He married a fellow scientist, Maria Skłodowska, the same year. She became known as Marie Curie after their marriage.

Pierre Curie’s two main scientific partners throughout his career were his wife, Marie, and his brother, Jacques. Together with Jacques, Curie explored crystallography, through which he discovered piezoelectric effects. Curie showed that the magnetic properties of a given substance change at a specific temperature—a level now known as the Curie point.

Curie conducted his studies of radioactive substances with his wife, and the pair overcame the challenges posed by inadequate lab equipment and heavy teaching schedules to succeed in isolating the elements of radium and polonium (Marie Curie named polonium after her native country, Poland). The Curies went on to describe many of the novel properties of radium, which would form the basis of subsequent research in the fields of nuclear physics and chemistry.

Pierre and Marie Curie were awarded half of the 1903 Nobel Prize in Physics for their work on radiation. The other half of the prize went to Henri Becquerel, whose work had informed the Curies' research. The Curies were also awarded the Davy Medal of the Royal Society of London in 1903. In 1905, Pierre Curie was elected to the Academy of Sciences.

Pierre Curie died in an accident in Paris, France, on April 19, 1906. Curie lost his footing while crossing the street and fell beneath the wheels of a horse-drawn vehicle, suffering a fatal skull fracture. He was 46 years old.

The Curies had two daughters, Irène and Ève. Irène continued the family tradition of scientific research. Along with her husband, Frédéric Joliot, she received the 1935 Nobel Prize in Chemistry. Ève Curie married the American diplomat Henry Labouisse, who received the 1965 Nobel Peace Prize for his work with the United Nations' Children's Fund. Ève is the author of a famous and award-winning biography of her mother. She became a United States citizen and died in New York City at the age of 102.