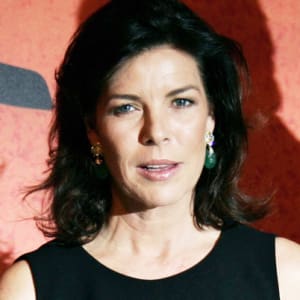 Princess Caroline of Monaco is best known as the eldest daughter of Prince Rainier III and American actress Grace Kelly.

Princess Caroline of Monaco is best known as the eldest daughter of Prince Rainier III and American actress Grace Kelly. She was born in Monaco. Although considered the most stable of the Grimaldi children, Princess Caroline has made headlines with her various romantic relationships. She has served as Monaco's de facto first lady since her mother's death in 1982.

Princess of Monaco. Born Princess Caroline Louise Margueritte, on January 23, 1957, in Monaco, a sovereign principality on the northern Mediterranean coast. Princess Caroline is the eldest daughter of Prince Rainier III of Monaco and Grace Kelly, the stunning American actress, who died in a car accident in 1982 at the age of 52.

Considered the most stable of the Grimaldi children (including brother Albert and younger sister Stephanie), Princess Caroline made headlines nonetheless with her various romantic relationships. After majoring in philosophy at the Sorbonne in Paris, she married the businessman Philippe Junot in 1978. Their union lasted only 28 months, ending in divorce in 1980. After the untimely death of her mother two years later, Caroline married Stefano Casiraghi in 1983. However, because her first marriage was not annulled by the Vatican until 1992, Caroline's three children with Casiraghi (sons Andrea and Pierre and daughter Charlotte), were not considered "legitimate" in Roman Catholic Monaco, and were technically disqualified from Monaco's royal succession.

Tragically, Casiraghi died in 1990 in a speedboat accident. Two years later, the Vatican's decision to annul Caroline's first marriage restored her children to legitimate status. After Casiraghi's death, Caroline moved her family full-time to a home in Saint-Remy, France, to shield her children from the inevitable spotlight that followed the Grimaldi family.

In 1999, Caroline married Prince Ernst August of Hanover. The couple had a daughter Alexandra, that same year. Ernst August put the royal family squarely back into the media glare with his rowdy antics, including his alleged assaults of a photographer in 1998 and a bar owner in Kenya in January 2000, and an embarrassing incident in which he was caught on camera in Hanover urinating in public in full view of a group of schoolchildren.

Princess Caroline, who has served as Monaco's de facto first lady since her mother's death, serves as president of the Monte Carlo Ballet, the Monaco Garden Club, the Princess Grace Foundation and various other charities.